Find traditional instrumental music
This is the stable version, checked on 25 January 2021.
Jump to: navigation, search 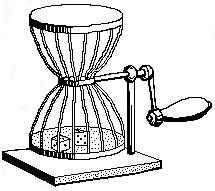 Chuckaluck device.
CHUCKALUCK. AKA - "Chuck a Luck." American, Reel (cut time). G Major. Standard tuning (fiddle). The tune is associated with Alabama fiddlers Sam McCracken (1888-1972) and fiddler Carthy Sisco, born in 1921 and raised in Carroll County, northwest Arkansas. Chuckaluck (also 'Chuck' or 'Chucker Luck') is a game of chance, derived from the medieval game of Hazard (as is modern Craps). It's also known as Bird Cage due to the mechanism of play in which an operator twirls three standard dice in an hourglass shaped wire cage. In England it was known as Sweat Cloth and the variant Crown and Anchor (which employs dice with symbols-the four card suits plus a crown and anchor-in the place of dots). It was a favourite game in speakeasies in the 1920's, as the odds are well in favour of the operator (house) even without loaded dice, and for this reason it is mostly found today in carnivals and charity events. Interestingly, a cone shaped chute that was sometimes employed as an alternate to the wire hourglass, especially in small stakes, hastily improvised games. The chute was made of leather, or sometimes of the cheaper tin, giving rise to the phrase "tinhorn gambler" from the shape and material of the device. 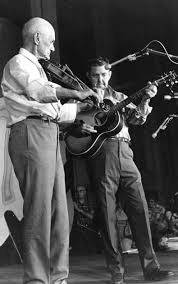