CLAYMORE, THE. Scottish, Strathspey. G Major. Standard tuning (fiddle). One part. Composed by A. Cameron. Hunter (1988) says the strathspey was named after the steamer Claymore [1] which sailed to the Hebrides from Oban in the latter 1950's and 1960's. Actually, it was the third vessel of that name to sail Oban Bay; the first was built in 1881 by the Thomson brothers and was a favorite of the great doyan of Scottish West Coast shipping, Graham Easton Langmuir. 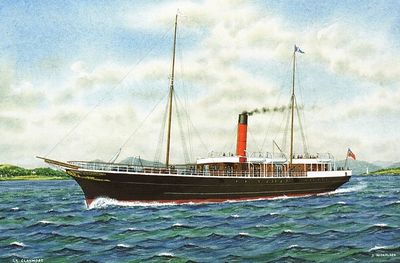 The original Claymore, by John Nicholson