Back to Coffee House (The)[edit]

THE COFFEEHOUSE. English, Country Dance Tune (2/4 time). G Major. Standard tuning (fiddle). AABB. The melody seems unique to Charles and Samuel Thompson's Compleat Collection, vol. 3 (London, 1773). The coffee-house was a London fixture from the time English merchants started trading for it with Turkish sources in Commonwealth times. By 1700 there were over 2,000 coffee houses in London, in which customers could read the newspaper, meet friends and conduct business, all for a small sum. Regarding such establishments, Tom Brown wrote: 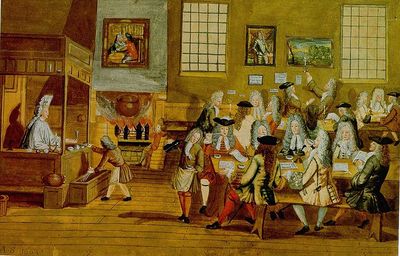 [a coffee house was] the place where several knights-errant come together to seat themselves at the same table without knowing one another, and yet talk as familiarly together as if they had been of many years acquaintance. They have scarce looked about them, before a certain liquor as black as soot is handed to them, which being foppishly fumed into this noses, eyes, and ears, has the virtue to make them talk and prattle together of everything but what they should do. [quoted in Maureen Waller, 1700: Scenes from London Life, 2000]

Back to Coffee House (The)[edit]