COILSFIELD HOUSE. Scottish, Strathspey ("Slowly") or "Pastoral" Air (4/4 time). G Major. Standard tuning (fiddle). AAB. :"Coilsfield House" is one of the finest compositions of Nathaniel Gow (1763-1831), the fourth son of famed Scottish fiddle-composer Niel Gow. It was named after the home of Colonel Hugh Montgomery (1749-1819), Earl of Eglinton, in the parish of Tarbolton, Ayrshire. Neil (1991) explains the name "Coilsfield" apparently derives from the grave of King Coil, reputed to lie somewhere near the mansion house. Coil, or sometimes Coilus or Coel Hen, was a British king in the Roman or post-Roman era who was linked to the Strathclyde area; his name comes down to us in modern times in the nursery rhyme "Old King Cole." The property was once known as "Quillisfield" and was so named in the charter of John De Graham, who assigned the property to the monks of Melrose. Around 1640 it was acquired by James Montgomery, 4th son of Alexander, 6th Earl of Eglinton, and remained in the family for 250 years. His descendent Colonel Hugh Montgomery (or Montgomerie) was himself an amateur fiddler and Scottish music enthusiast and also was honored as the dedicatee of the Gow's Fourth Collection of Strathspey Dances (Edinburgh, 1800). The mansion was well-known to the poet Robert Burns when he dwelt at Lochlea, for it was where he went to meet his Highland Mary, Mary Campbell, then residing as a dairymaid at Coilsfield Housse. It is where "Summer first unfaulds her robes," and where "they langest tarry," said he. His romance was short-lived however, for while they were lovers in the Spring, by October, 1786, Mary had died of a fever caught while waiting on a sick boy, her brother. 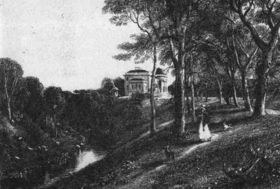 Ye banks and braes and streams around
The castle o' Montgomerie,
Green be your woods and fair your flours,
Your waters never dumlie!
There simmer first unfauld her robes,
And there the longest tarry;
For there I took the last farewell
O' my sweet Highland Mary.