Find traditional instrumental music
This is the stable version, checked on 15 December 2020.
Jump to: navigation, search

Back to Colonel Baird (1)

COLONEL BAIRD [1]. AKA and see "Nae luck about the house when our goodwife's awa, "There’s nae luck about the house (3)." Scottish, Jig (6/8 time). F Major. Standard tuning (fiddle). AABB. Composed by "the late Mrs. Oswald of Auchicruive" . In 1793 wealthy merchant Richard Oswald married the "incomparable" Louisa "Lucy" Johnston (c. 1760-1797), daughter of Wynne Johnston of Hilton-in-the-Merse; she was a celebrated, talented and accomplished beauty (for whom see note for “Miss Johnston of Hilton's Fancy”)

The title honors Sir James Gardiner Baird, who, in 1781, married Henrietta Johnson of Hilton, Lucy's sister. He succeeded to the title of 6th Baronet Baird, of Saughton Hall in 1771, just before he joined the 17th Foot with the rank of Ensign in 1772. Baird rose in rank to Lieutenant just as the American War of Independence broke out, and quickly gained promotion to Captain with the 71st Foot. He finally became Lieutenant-Colonel in 1796 with the 28th Light Dragoons, and he commanded the East Lothian Yeomanry Cavalry regiment from its embodiment in 1797. 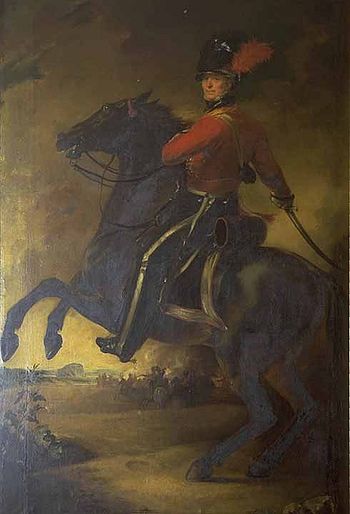 Sir James Gardiner Baird (c. 1756-1830)
Edinburgh publisher James Johnson used the melody as the vehicle for the song "Nae luck about the house when our goodwife's awa," printed in his Scots Musical Museum, vol. 6 (1803).

Back to Colonel Baird (1)