Back to Colonel Tarleton's Quick March

COLONEL TARLETON'S QUICK MARCH. English, March (6/8 time). D Major. Standard tuning (fiddle). AABB. The march honors British solder and M.P. Banastre Tarleton [1] (1754-1833), hero or villain (depending on your point of view) of the American Revolution, where he commanded British loyalists and regular troops with skill and sometimes ruthlessness. By the end of the war he had been promoted to the rank of Lieutenant Colonel based on his abilities, not due to purchased ranks. After he returned to England where he became M.P. for Liverpool, a post he retained every year save one until 1812. As M.P. he supported the Whig party, but was also an ardent supporter of the slave trade, as a result of his mercantile Liverpool family roots and connections. 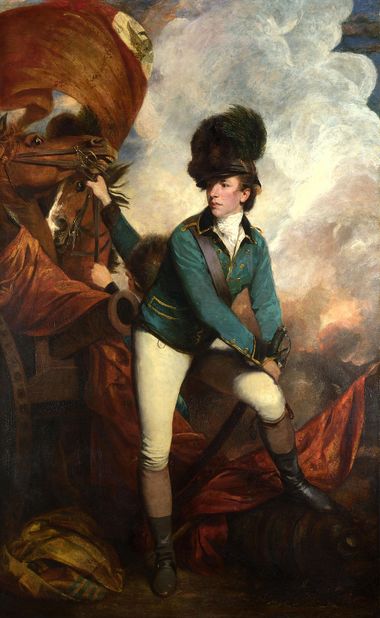 Banastre Tarleton, c. 1782 by Sir Joshua Reynolds. He is in the uniform of the British Legion, his troop of irregulars. He introduced the style of leather helmet he wore to the British Army, were it remained in service with artillery troops until the end of the Napoleonic wars.

Back to Colonel Tarleton's Quick March