Back to Corgarff Castle (2)

CORGARFF CASTLE [2]. Scottish, Strathspey (whole time). A Major. Standard tuning (fiddle). AAB. Corgarff Castle, Corgarff, Aberdeenshire, was originally constructed about 1550 by John Forbes of Towie. His wife Margaret defended the structure when attacked by the Gordons while the Forbes men were away, shooting one of the attackers in the knee. The Gordons retaliated by piling brush against the walls and firing the castle, killing all the inhabitants (although some accounts give that Margaret escaped to Ireland to give birth to John's son, Alexander). Needless to say, it is said to have been haunted ever since. In recent years the castle, once a ruin, has been magnificently restored. 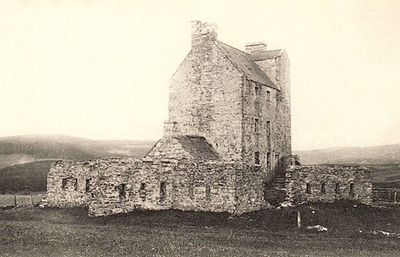 The strathspey was composed by Aberdeenshire fiddler-composer Alexander Walker, born in Rhynie, Strathbogie, in 1819. Walker was an inventor (of surveying instruments, for example), agriculturalist, fiddler and composer of works collected in a volume published in Aberdeen in 1866. He was employed as a gardener for Sir Charles Forbes at Castle Newe, who was also his patron. After the American Civil War, Walker emigrated to the United States, following family, and settled near Williamstown, Massachusetts, where he established a prosperous farm of his own. He continued to compose music, although his American output is now lost. He died sometime around the end of the century (he is recorded as having helped survey areas of Williamstown in the mid 1890’s). This passage (from Arthur Latham Perry's Origins in Williamstown: A History, 1894, p. 28 ) is thought to refer to him:

Back to Corgarff Castle (2)