Find traditional instrumental music
This is the stable version, checked on 29 June 2020.
Jump to: navigation, search

Back to Cottey House

COTTEY HOUSE. English, Country Dance Tune (6/8 time). D Major. Standard tuning (fiddle). AABB. "Cottey House" was first published in the supplement to the 11th edition of the Dancing Master (London, 1701), and appeared in all subsequent editions of the long running series until the 18th and final edition of 1728 (printed by John Young). It also appears in Walsh's Compleat Country Dancing Master, printed in London in 1718 (with editions in 1731 and 1754). 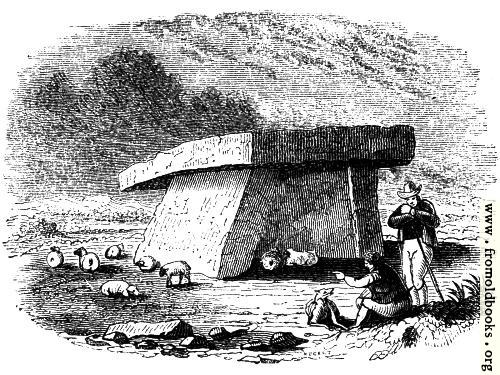 Kit's Coty House, Kent. 1845.
The title was researched by Graham Christian [1], who found it to refer to Kit's Coty House, the name of ancient monument near the village of Addington, Kent, consisting of three standing stones topped with a table-like fourth stone. According to local lore it was supposed to have been the funeral monument of Catigern, the son of an early English King who was killed fighting the Saxons. It was thought that over the years "Catigern's House", built with coits or large stones (i.e. "Catigern's Coit House") devolved into "Cottey House" in local usage. While there have been many theories about the structure, including a place for Druidic human sacrifices, the consensus of modern scholarly opinion is that in was a tomb.


Back to Cottey House