Back to Country Attorney (The)

COUNTRY ATTORNEY, THE. English, Country Dance (2/4 time). G Major. Standard tuning (fiddle). AABB. The Country Attorney was a comic play by Richard Cumberland (1732-1811), staged at London's Theatre Royal in the Hay-Market, July 7th, 1787. Unfortunately, it was not well received and ran only a half-dozen nights. Cumberland reworked much of the same material a few years later for his The School for Widows (1789). He was not regarded in the first rank of playwrights, even by his peers. 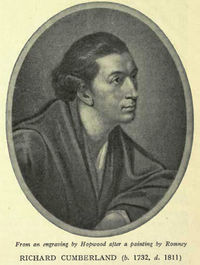 Mr. Cumberland is unquestionably a man of very great abilities; it is his misfortune to rate them greatly above their value.

Back to Country Attorney (The)