COWBOY'S DREAM [2]. American, Reel (cut time). D Major. Standard tuning (fiddle). AABB. A signature tune from McGinty's Oklahoma Cowboy Band [1], recorded for OKeh records in 1926. The band was the precursor to the more famous Otto Gray's Oklahoma Cowboy Band, and was the first nationally famous cowboy music band, whose members were, at the beginning, actual working cowboys from the ranches around Ripley, Payne County, north-central Oklahoma. The group was formed in the 1920's by Billy McGinty (1871-1961), a former Rough Rider and alumnus of Buffalo Bill Cody's Wild West traveling spectacle, from musicians who got together for local dances and jam sessions. McGinty was a local cowboy legend and, when a radio station in Bristow asked the group to play on air, McGinty was requested to lend his name to the band which was then originally called Billy McGinty's Cowboy Band. McGinty did not play an instrument or sing, but was the spokesperson for the group, its announcer, and occasionally contributed an on-stage rope trick. Otto Gray (1884-1967), who was credited as 'Director' of the band on the early OKeh recordings) took over when McGinty became a postmaster of Ripley, and, as the group became more popular and traveled more, the other original members dropped out. They were replaced by professional musicians and the group continued to record, broadcast over the radio and play vaudeville stages in the Midwest and Northeast. They disbanded in the early 1930's, victims of the Great Depression, like so many other similar string bands. 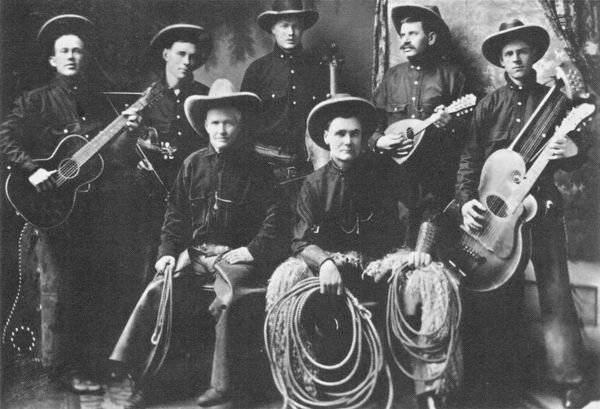 The Oklahoma Cowboys. Billy McGinty is seated left, Otto Gray seated to the right.
Gray had business acumen and was very successful at marketing his group, who were the first to appear in western clothing (an affectation that was quickly imitated). He purchased for their tours a series of increasingly elaborate and expensive automobiles customized with loudspeakers, steer horns and even a cowcatcher.