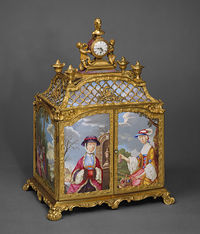 A jewel cabinet with a watch affixed to the top, signed by James Cox

James Cox (ca. 1723–1800) was an artificer-merchant, manufacturer and entrepreneur who briefly had a museum in London in the early 1770's, in which he exhibited all kinds of precious jewelry, automatons and oddities such as Charles Byrne, the Irish Giant. A tribute of sorts was paid to his museum in the second act of Sheridan's play The Rivals (1775), when Sir Anthony Absolute thundered to his son, on learning of his reluctance to marry Lydia Languish:

Cox sold off the contents of his museum a few years after it opened, by lottery, and attempted to liquidate his business. He appears not to have been wholly successful, however, for his business enterprises were much curtailed, although he and his sons continued as retailers, but not manufacturers.