Back to Dalkeith Maiden Bridge

DALKEITH MAIDEN BRIDGE. Scottish, Hornpipe and Scottish Measure (cut time). E Minor. Standard tuning (fiddle). AABB. The tune is named for an ancient bridge built on the site of a ford on the South Esk, not far from the site where once stood the Abbey of St. Mary, Newbottle. The Rev. J.C. Carrick, writing in his The Abbey of S. Mary Newbottle (1908), explains: 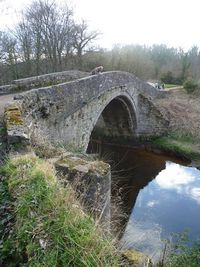 A minor road passed across the park through the monastic village, and over the Maiden Bridge towards Dalkeith, in all probability. A vigorous controversy has been waged over the name of this bridge, which, crossing the South Esk about a mile from the Abbey, so pictruesquely reminds one of the Brig o' Doon in Ayrshire. Various antiquarians have held various views about it; but possibly the bridge, whether the work of Roman soldiers or not,--and there was a Roman camp on the hill,-- was baptised the "Maiden Brig" after the great historical event so beautifully depicted in the Italian painting which adorns one of the mantelpieces in the drawing-room of the present mansion. Robert Burns sets one of his sweetest songs to the air, "Daldeith's Maiden Bridge." Some are of the opinion that it is the "Madonna Brig" or "Bridge of Our Lady," to whom the Abbey was dedicated, and that the Princess Margaret never crossed it at all, but entered by the "Queen Margaret Gate," still standing. ... [p. 96]

The bridge is now within the bounds of the Newbattle Golf Club.

The Robert Burns song that Carrick alluded to is "Sae Far Awa" (sometimes called "My native land, sae far awa"), printed in Johnson's Scots Musical Museum [1] (1796), in which Burns directed that it be sung to the air "Dalkeith Maiden Bridge." It begins:

O, sad and heavy should I part,
But for her sake sae far awa;
Unknowing what my way may thwart
My native land sae far awa.
Thou that of a' things Maker art,
That form'd this fair sae far awa,
Gie body strength, then I'll ne'er start
At this my way sae far awa.

Back to Dalkeith Maiden Bridge