Back to Dance Around Molly[edit]

DANCE AROUND MOLLY. Old-Time, Breakdown. USA; Missouri, North Carolina. A Major. Standard or AEae (Art Stamper) tunings (fiddle). AABB (Phillips, Silberberg): AA'BB' (Beisswenger & McCann). A traditional dance tune collected in Missouri and North Carolina. "Well-known tune among Missouri fiddlers" (Frank Maloy), and indeed, it has been recorded by (and is associated with) several fiddlers from that state. It is on Charlie Walden's list of '100 essential Missouri fiddle tunes'. Howard Marshall says the reel is associated with fiddlers from the north and central part of Missouri, such as Jake Hockemeyer, Johnny Bruce, Cleo Persinger, Taylor McBaine, Pete McMahan, and Charlie Walden. Howard says: "All the fiddlers I've known credit Jake Hockemeyer with the best version anywhere and it was one of Jake's fiddle contest "money tunes." I played backup guitar for Hockemeyer in several contests in the 80s when he played the tune to good effect even though by that time his arthritis problems were getting him down. The tune is what I'd call a hornpipe." The melody has lost some currency in modern times among contest players in the state. 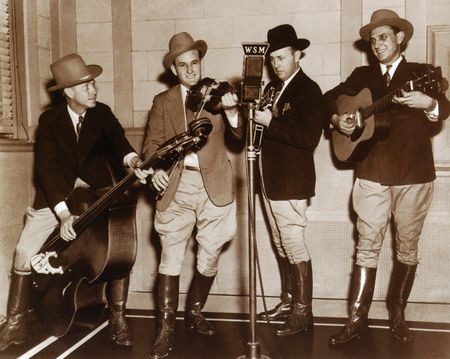 "Dance around Molly" was played by Tommy Magness over WSM in the 1940's and the composition is often credited to him--certainly he popularizing it, as his 1951 recording was highly influential. According to one story in circulation, Magness composed the tune one night after a gig when eating in a restaurant with his band. A waitress named Molly started bantering with the band and got them to play a tune so she could dance to it. Either the tune was composedly them on the spot, or it was one Magness composed in commemoration of the event, but the title became "Dance around Molly." The story may be apocryphal, however, and "Dance around Molly" may have been a traditional tune. It was in the repertoire of Magness's contemporary, J.E. Mainer. The 'B' part is very similar to the 'B' part of "Frisky Jim."

Back to Dance Around Molly[edit]