Back to Dandie Dinmont 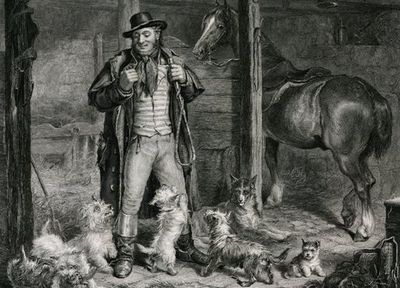 Dandie Dinmont
DANDIE DINMONT. Scottish, Strathspey (whole time). E Minor. Standard tuning (fiddle). AAB. Dandie Dinmont is (like "Meg Merrilies") a character in Sir Walter Scott's Guy Mannering (1815), the second of his anonymously published and hugely successful Waverly novels. Dinmont is an honest and forthright Borders farmer whom another character (Brown) rescues from thugs on the road after dining at Mumps Inn, where the two first met. In gratitude Dinmont invites Brown to stay at his farm with his large family (and their many terriers, all called Mustard or Pepper) for some days. Dinmont makes appearances periodically in the novel.

The only dog breed known to have its name taken from a character in literature is the Dandie Dinmont terrier. First breed in Scotland, the terrier breed may be closely related to the Bedlington terrier, although the dog's ancestry probably includes strains of basset hound, border terrier and Cairn terrier. The Dandie Dinmont was originally developed for hunting small game and particularly became known for the ability to track otter. Over the years, the Dandie became more of a house pet and show dog, valued for a distinct appearance.

Lowe sometimes named his compositions from characters in the works of Burns and Scott.

Back to Dandie Dinmont