DAPHNE. AKA and see "Hit and Miss." English, Air and Jig (6/8 or 3/4 time). E Minor (Karpeles, Raven): D Minor (Chappell). Standard tuning (fiddle). AAB (Raven): AABBC (Chappell, Karpeles). The air was published by John Playford in the first edition of his English Dancing Master (London, 1651) and retained in the next two editions in 1652 and 1657, after which it appeared in the Dancing Master as "Daphne or The Shepherdess" (through the 8th edition of 1690). 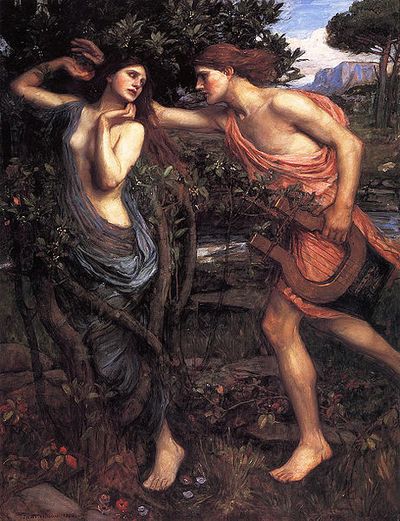 However, "Daphne" was older than Playford, and appears to have been the tune for a 17th century ballad based on the ancent Greek myth, retold by Hellenistic and Roman authors in the form of an amorous vignette, regarding Apollo's pursuit of the nymph Daphne, who escaped only by turning herself into a tree. It is known that the melody was a great favorite in Elizabethan times [Ian Payne, The Almain in Britain], along with others found in Playford; "Heart's Ease (1)," "Greenwood" and "Wooddicock." "Daphne" also appears in the Fitzwilliam Virginal Book (with variations by composer Giles Farnaby), Adriaen Valerius' Nederlandtsche Gedenck-clanck (1626), J.J. Starter's Friesche Lust-Hof (1621), Jacob van Eyk's Fluyten Lust-Hof (1654, as "Doen Daphne"), and Forbes' Cantus of Songs and Fancies (1662, 1666, and 1668, Aberdeen, Song XXI, a parody). Words to the tune can be found in the Roxburghe Collection, Giles Earle's Song-book (1626), and Deloney's Royal Garland of Love and Delight (1674).