Find traditional instrumental music
This is the stable version, checked on 11 June 2021.
Jump to: navigation, search 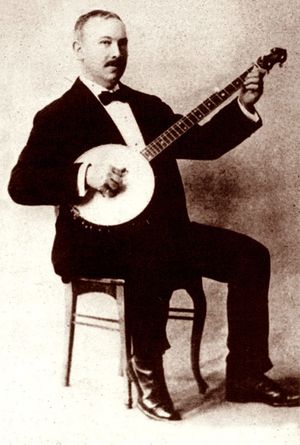 DARKEY'S DREAM[1]. AKA – "Darkies Dream, "Darky's Dream." AKA and see "Acorn Stomp," "Darkey Dan," "Offally Favorite," "Wind That Blows You Away (The)." American; Reel or Schottische. Irish, Barn Dance. USA; eastern Tenn., western N.C., West Virginia, Missouri, southwestern Pa., Arizona. D Major (Bayard, Beisswenger & McCann/Goforth, Roche): F Major (Phillips): G Major (Beisswenger & McCann/Robertson). Standard tuning (fiddle). AAB (Roche): AA'B (Bayard, Phillips): AA'BB'CC (Beisswenger & McCann/Robertson): AABBCD (Beisswenger & McCann/Goforth). The first strain appears to be fairly uniform among fiddlers' versions of this tune, although the second strain varies (sometimes quite a bit). One version was in the repertoire of legendary fiddler J. Dedrick Harris, born in Tenn., who played regularly with Bob Taylor when he was running for Governor of the state in the late 1800's. He moved to western North Carolina in the 1920's and influenced a generation of fiddlers there: Osey Helton, Manco Sneed, Bill Hensley, Marcus Martin—in fact, a tune by the title was also in Osey Helton's repertoire. "Darkie's Dream" was identified by John Hartford as a Missouri tune similar to "Essence of Sugar Cane" which is known to have inspired the three-part "Darkie's Dream" composed by George L. Lansing in 1887. Lansing's composition was recorded by the leading banjo soloists of the early 20th century, Fred Van Eps and Ruby Brooks. Lansing himself was a white banjo player in Boston in the 1880's, who also composed "Darkie's Awakening" and "Drowsy Dempsy"--he disparaged the Irish as well as African-Americans.

It was Lansing's most popular composition and was widely disseminated, even enjoying popularity overseas. Over the years it has been set as a schottische, barn dance and reel, the latter particularly in American "old-time" vernacular. A tune by this title in the key of G Major was in the repertoire of Arizona fiddler Kenner C. Kartchner who identified it as a "clog dance," sometimes played at dances for a schottische. Bayard (1981) noted that Pennsylvania fiddlers played this tune with a variety of tempos and styles, and he too mentions that the schottische style was common. Other melodies that bear a general or part similarity are "Always Welcome," "Butcher's Row (2) (The)", "Essence of Sugar Cane" and "Old Yaller Hound." "Darky's Dream" was the repertoire of Pocahontas County, West Virginia, fiddler Burl Hammons (1908-1993), who learned it from African-American musician Grafton Lacey. An early version of the Missouri variant appears in W.H. Morris' Old Time Violin Melodies, printed in St. Joseph in 1927, and it was played by several later Missouri fiddlers such as Gene Goforth.

The original tune was picked up, relatively intact, by musicians in Ireland and appears in Frank and John Roche's early 20th century (1927) collection (although in a section headed "Old Dances, not Irish by origin"). "Darkey's Dream" was recorded by fiddler Michael Gorman as "Jamesy Gannon's Favorite" and by James Morrison's student, Timmy Cronin, as "Offally Favorite" in 1957.