Find traditional instrumental music
This is the stable version, checked on 24 July 2020.
Jump to: navigation, search

Back to Davy Davy

DAVY, DAVY. AKA - "Davy." AKA and see "Going Down the River," "Sailing down the River," "Paddy won't You Drink some Cider?," "Paddy Won't You Drink Some Good Old Cider." American, Song and Breakdown. A version of "Goin' Down the River," by Tennessee's Perry County based Weems String Band, one of whose (brother Jess) members played the cello. It was one of only two sides they commercially recorded. Richard Nevins (in R. Crumb's Heroes of Blues, Jazz and Country, 2006) remarks on the juxtaposition of the back-country band's primitive, archaic sound and the sophisticated techniques of position playing by the fiddlers on the record (one fiddle plays in 3rd, and one in 5th position), a contrast that he finds at the heart of the band's appeal. Unfortunately, the lyrics are a product of the blatantly racist culture prevalent in areas of the United States at the time, and inappropriate for performance today: 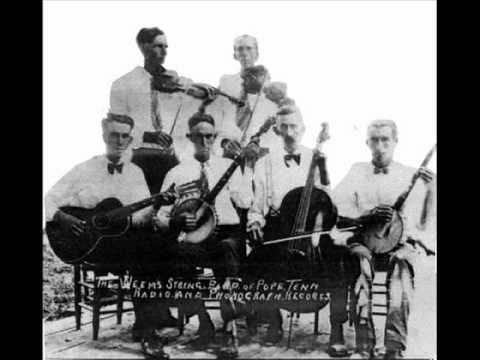 The words were quickly dashed off by the Weems brothers after they arrived in Memphis for their 1928 recording session for Columbia Records [1]. Their repertoire was instrumental tunes, but Columbia wanted lyrics and vocals, believing the recordings would sell better. The band quickly came up with a few couplets which Columbia found met their requirements, also singing:

The simple melody has also attracted other floating verses. Despite its simple and repetitive melody and slapdash lyrics, musicologist Charles Wolfe remarked [2] the sole recording session produced "what many critics deem the finest two string band sides ever recorded, "Davy Davy" and "Green Back Dollar"'.

Back to Davy Davy