Back to Deal Stick the Minister (1)[edit]

DEAL STICK THE MINISTER [1]. Scottish, Dance Tune (3/4 time). A Minor. Standard tuning (fiddle). AB. Printed in Henry Playford's Collection of Original Scotch-Tunes (London, 1700, p. 16), a collection of Scottish dance tunes. The title is a defiant response to religious conservatives who frowned on dancing as dangerously immoral. "(The tune) is still as well-known as it was in 1683 when a Stirling man was 'tried for reviling a parson,' in causing the piper play 'The Deil Stick the Minister'. Sundry pipers were there present as witnesses, to declare it was the name of ane spring'" (Alburger, 1983). Poet Robert Burns noted the association between devilry and Scottish dances in his poem "Tam o'Shanter" (1791) when he wrote: 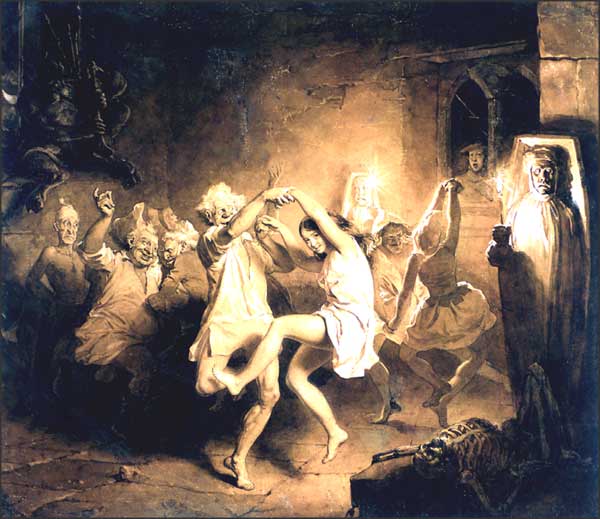 'Warlocks and witches in a dance' by 19th-century illustrator John Faed.

Warlocks and witches in a dance:
Nae cotillon, brent new frae France,
But hornpipes, jigs, strathspeys, and reels,
Put life and mettle in their heels.

See "De'il Stick the Minister (2)" for a later 18th century development of the tune, set in duple meter.

Back to Deal Stick the Minister (1)[edit]