Death of General Wolfe (The)

Back to Death of General Wolfe (The)[edit]

DEATH OF GENERAL WOLFE. Irish, Air (4/4 time). A Major. Standard tuning (fiddle). One part. General James Wolfe [1] (1727-1759) led the British forces at the Plains of Abraham, Quebec, in 1757, where (as every English-speaking schoolboy learns) he won a great victory over the French but was slain at the height of his triumph. A different air called "Death of General Wolfe" appears with lyrics in the music manuscript copybook of Henry Livingston, Jr. Livingston purchased the estate of Locust Grove, Poughkeepsie, New York, in 1771 at the age of 23. In 1775 he was a Major in the 3rd New York Regiment, which participated in Montgomery's invasion of Canada in a failed attempt to wrest Quebec from British control. An important land-owner in the Hudson Valley, and a member of the powerful Livingston family, Henry was also a surveyor and real estate speculator, an illustrator and map-maker, and a Justice of the Peace for Dutchess County. He was also a poet and musician, and presumably a dancer, as he was elected a Manager for the New York Assembly's dancing season of 1774-1775, along with his 3rd cousin, John Jay, later U.S. Chief Justice of Governor of New York. 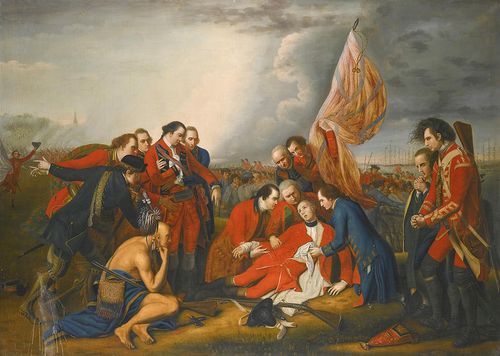 The Death of General Wolfe, from the Studio of Benjamin West

Back to Death of General Wolfe (The)[edit]