Find traditional instrumental music
This is the stable version, checked on 21 November 2022.
Jump to: navigation, search

Back to Delvin House (1) 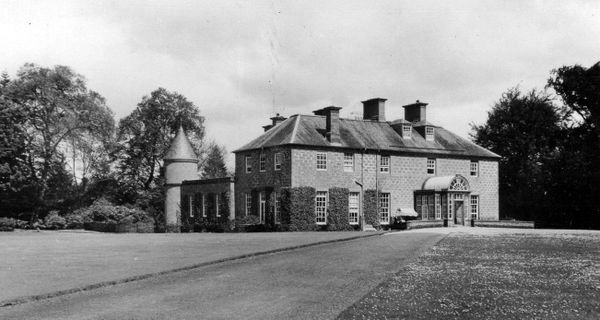 DELVIN HOUSE [1]. AKA and see "Butcher's Apron (The)," "Hobble the Boutches," "Hot Broth," "Warm Broth." Scottish, Reel or Strathspey. C Major. Standard tuning (fiddle). AB (Surenne): AAB (Lowe, Skye): AABB' (Kerr): AABBCD (McGlashan). The composition of "Delvin House [1]" is credited to fiddler composer Niel Gow (1727-1806) by MacDonald. However, it appears without composer credit in the small folio printed by Gow & Shepherd in 1803, where it appears on the same page as "Lady MacKenzie of Coul's", with the note: "Lady Mackenzie of Coul's strathspey and Delvine House, a favorite medly danced at the Queen's assembly in Geo: Street rooms the 18th Janry. 1803." Since Nathaniel added his name as composer of "Lady Mackenzie" it is curious he did not identify his father as composer of "Delvin House (1)" if this were the case.

Delvine House, Spittalfield, Perthshire, was the residence of Sir Alexander Muir MacKenzie in McGlashan's day. The Muir Mackenzie Baronetcy, of Delvine in the County of Perth, is a title in the Baronetage of the United Kingdom. It was created on 9 November 1805 for Alexander Muir Mackenzie. Born Alexander Muir, he had assumed the additional surname of Mackenzie on succeeding to the estates of his great uncle John Mackenzie, of Delvine, Perthshire, third son of Sir Kenneth Mackenzie, 1st Baronet, of Coul. Devine House was located about 7 miles from Gow's home in Dunkeld. See also O'Neill's Irish variant "Butcher's Apron (The)" and William Bradbury Ryan's (1883) "Hobble the Boutches." Cumbrian musician John Rook entered it into his 1840 music manuscript collection as "Warm Broth."

Back to Delvin House (1)