Find traditional instrumental music
This is the stable version, checked on 19 November 2020.
Jump to: navigation, search

Back to Devil Eat the Groundhog 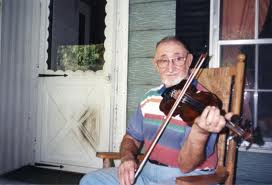 Owen "Snake" Chapman
DEVIL EAT THE GROUNDHOG. AKA - "Devil Ate the Groundhog." Old-Time, Breakdown. USA, Kentucky. G Major. Standard tuning (fiddle). AB (Silberberg, Titon): AA'B (Phillips). Source Owen Chapman, who learned the tune from his father, George "Doc" Chapman (b. circa 1850) says it was inspired by a hunter who had a lapse and left his skinned day's hunt in the same room with his dog, according to Jeff Titon (2001). When he returned he found the dog had devoured the game, leaving the hunter to vexedly sing:

Vance Randolph collected a title in the Ozarks called "Devil Wants a Woodchuck" that is perhaps this tune.

Back to Devil Eat the Groundhog