Devil on two Sticks (The)

Find traditional instrumental music
This is the stable version, checked on 24 February 2020.
Jump to: navigation, search

Back to Devil on two Sticks (The) 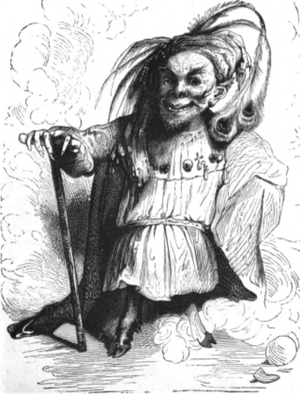 Asmodeus, or The Devil on Two Sticks

The title invokes the comic novel Le Diable Boiteux by Alain-René Lesage (1668–1747) originally published in 1707, translated to English as The Devil on Two Sticks and published in London in 1708. The demon Asmodeus is the titular Devil on Two Sticks, guiding Don Cleophas Leandro Perez Zambullo through the follies and farces of Madrid and its inhabitants.

The 'devil on two sticks' (the diabolo) is also a juggling prop that involves a spool and string tossed by two sticks. It was derived from the Chinese yo-yo.

Back to Devil on two Sticks (The)