Back to Didelots Dance in Virginia 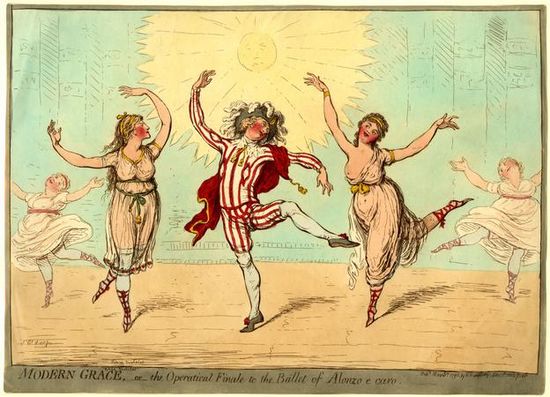 'Modern grace, - or - the operatical finale to the ballet of Alonzo e Caro', 1796. Charles Didelot with Rose Didelot and Madame Parisot.
DIDELOT'S DANCE IN VIRGINIA. English, Dance Tune (3/4 time). G Major. Standard tuning (fiddle). AB. The tune presumably was from James Cobb's (1756-1818) comic opera and afterpiece, Paul and Virginia (1800), adapted from Bernardin de Saint Pierre's Paul et Virginie (1788, 1789). with music by Joseph Mazzinghi. It was performed at the Theatre Royal Covent Garden beginning in May, 1800, with Rose Didelot--Madam Didelot--in one of the principle roles. Didelot was the wife of Parisian choreographer Charles Louis Didelot (1767-1837) and was active in the theater from 1796 to 1806, but died in that latter year while giving birth to their son, Carl Didelot. She was a rival of Mme Parisot. The three caused a scandal with their scanty costumes in a performance of Alonzo e Caro at the Opera in 1796.. See also "Madam Didelot's Fancy," also named for her.

Charles Didelot was born in Stockholm and by 1776 was studying in Paris. He made his official debut with the Paris Opéra in 1791, and removed to London from 1796-1801 and again from 1811-1816. In the intervening years he worked in St. Petersburg, and returned there after 1816, remaining in that city until the end of his life.

Back to Didelots Dance in Virginia