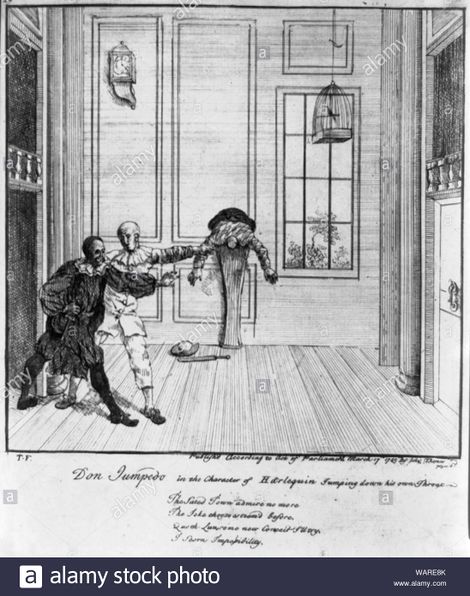 Don Jumpedo in the character of Harlequin jumping down his own throat. Engraving.
DON JUMPEDO. English, Jig and Country Dance Tune (6/8 time). F Major. Standard tuning (fiddle). AABB. The tune was first printed (along with directions for a country dance) in Richard Baldwin's periodical The London Magazine; or, Gentleman's Monthly Intelligencer (March, 1750). In a curious printing error, the melody was printed upside down and backwards, while the rest of the page was correctly set. This may or may not have been purposeful, for 'Don Jumpedo' was a preposterous theater invention that flashed briefly in 1749, then quickly departed as the fad ran its course.

Following a hoax stunt by "Bottle Conjurer" William Nicholls in which he advertised that he would escape on stage into a bottle (the audience showed up, but he did not), Covent Garden advertised[1] in March of 1749 that:

Don Jumpedo, who lately was to have performed at the Little Theatre in the Haymarket, appeared on Saturday last, at the Theatre in Covent-Garden, in the Character of Harlequinn in the Royal Chace; in which he made his first Essay of Jumping down his own Throat, and was universally applauded.

Not to be outdone, the two months later Drury Lane advertised an afterpiece, Lethe and Jumpedo, "The whole to conclude with an extraordinary and surprising performance of the Original Seignor Capitello Jumpedo, who, after entertaining the audience with a Hornpipe, will in a manner entirely new, Jump down his own throat." Upon which Covent Garden seized the initiative by advertising that their 'Don Jumpedo' would not only jump down his own throat, but "afterwards Jump Up again." Other London theater venues jumped on board, but by the end of the year the Jumpedo craze died. No one knows who the performers were who masqueraded as Jumpedo.