Back to Donald MacLean of Lewis[edit]

DONALD MACLEAN OF LEWIS. AKA and see "Pipe Major Donald MacLean of Lewis (1)." Scottish, March. Cape Breton, Jig. A Dorian. Standard tuning (fiddle). AABB'CCDD. Composed by Donald MacLeod in honor of Pipe Major Donald MacLean [1] (1908-1964) of the Isle of Lewis. MacLean played the bagpipes with reversed hands, and legend has it that his large instrument was so robust that others who had occasion to attempt to play it could not blow it; furthermore, "those that tried were never right again." MacLean served twenty-two years in the British army, five of them as a POW in Germany and Poland after he, along with many pipers from the 51st Highland Bridgade, was captured in France at St. Valery in 1940. Paul Stewart Cranford notes that Cape Breton fiddlers tend to play this Scottish pipe march as a jig. Jerry Holland heard it as a boy in Boston, from the playing of Bill Lamey [Cranford]. 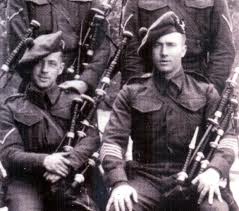 Back to Donald MacLean of Lewis[edit]