Find traditional instrumental music
This is the stable version, checked on 22 February 2021.
Jump to: navigation, search

Back to Dorr's Retreat 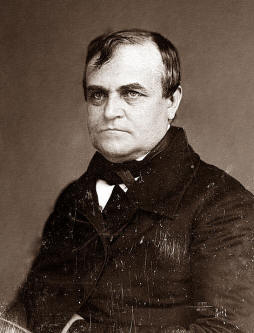 Thomas Wilson Dorr (1805-1854)
DORR'S RETREAT. American, Jig (6/8 time). G Major. Standard tuning (fiddle). AABB. The title refers to an obscure but resonant event in American political history called the Dorr Rebellion. Thomas Wilson Dorr (1805-1854), a lawyer and resident of Rhode Island, led a political rebellion against the establishment in the state of Rhode Island in 1841-1842. The state had operated under rules of an old charter dating to 1663, that reserved the right to vote to landowners, which was fairly egalitarian in the early days of the colony (when the majority owned property in the relatively sparsely populated region). However, as time went by more and more people moved to population centers in the state and were not landowners, which meant they could not vote. This disenfranchised population was at the political mercy of the rural landowners in the state. Dorr sought to correct this by giving the right to vote to native-born residents of Rhode Island, not just property owners (immigrants, most non-whites and women still were excluded). For six weeks in 1842 there were parallel governments, and the Dorrites stood down from confrontation with the Charterists (after their canon misfired, and one bystander was killed by accident). However, they were successful in getting a new constitution for the state in 1843 that expanded the vote, and 25% more people were able to vote in the next election.

Dorr's exercise of rebellion was not forgiven, and in 1844 he received a sentence of life imprisonment at hard labor. He was not friendless, however, and sympathetic Whig politicians helped to secure his release in 1845, although by that time he was in poor health. A modern historian opined that Dorr was blinded by his insistence on standing on principle, pointing out that the Dorrites had been offered every reform they sought, but Dorr saw compromise as capitulation and would have none of it. See also Howe's companion pieces "Dorr's Return" and "Governor Dorr's March."

The title "Dorr's Retreat" probably refers to his fleeing to New York after the Dorrites unsuccessful attack against the arsenal in Providence, Rhode Island, (where their canon misfired, but ignited the timidity of Dorr's force).

Back to Dorr's Retreat