DOWN THE PIKE. Old-Time, Reel (cut time). G Major. Standard tuning (fiddle). AABB'CC'. The recorded source for the tune, Lotus Dickey (1911-1989), of Grease Gravy Hill, Paoli, southern Indiana, was a traditional fiddler and singer, who, late in life was 'discovered' by folklorists and 'revival' musicians. The last decade of his life was filled with appearances at folk festivals and workshops, and with the stream of enthusiasts who came to learn from him. He was awarded grants from the state arts association, and declared an 'Indiana State Treasure' before his death. 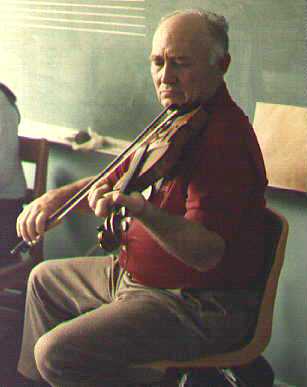 Source for notated version: Lotus Dickey (Indiana) [Phillips]. Dickey declared he had the tune from his brother, Cyprien, but also said he learned it around 1922 from Allen Downey, a fiddler originally from Robinson, Ill., who had moved southeastwards to Orange County, Indiana. "He was a fine musician, a fiddler," recalled Dickey.