Downfall of Paris (The)

Find traditional instrumental music
This is the stable version, checked on 18 March 2021.
Jump to: navigation, search

Back to Downfall of Paris (The)

DOWNFALL OF PARIS, THE (Ceimsios Parais). AKA - "Scrios b-Paris," "Fall of Paris." AKA and see "Hae You Ony More Ado" (Shetland), "Mississippi Sawyer (1)" (USA). Irish, Hornpipe or Set Dance; English, Hornpipe; American, Reel; Scottish, March. G Major (Johnson, Kerr, O'Neill): D Major (Ashman, Bruce & Emmett, Cahusac, Howe, Old-Time versions): C Major (Manson, Winstock): B Flat Major (Howe, Wilson). Standard tuning (fiddle). AABCC (O'Neill/Krassen): AABBCC (O'Farrell): ABCD (Johnson): ABCCDD (Howe, O'Neill/1915, Wilson): ABBCCDD (Cahusac): AABBCCDD (Bruce & Emmett, Manson, O'Neill/1001): AA'BBCCDD (Sweet): AA'BBCC'DD" (Kerr): ABBCDDEE (O'Neill/1850). Better known in the American South and among modern American fiddlers as "Mississippi Sawyer (1)," the melody was called "The Downfall of Paris" in Europe and this title was at one time retained in parts of Tennessee and the Ozarks. According to Winstock (1970), the tune's popularity may have surpassed that of the famous "British Grenadiers (The)" in its day. It was played early in the 19th century when the allies entered Paris after the battle of Waterloo, but "on that occasion (the British commander) Wellington sharply put a stop to it, and the offending Royal Regiment played instead 'Croppies Lie Down.' Apart from being played by military bands on every conceivable occasion, its 'one tormenting strum, strum, strum' was the delight of amateur pianists throughout Britain" (Winstock, 1970; p. 105).

The melody, however, had not been new to France in Wellington's time. Famously, it had been the vehicle for the song "Ça Ira," or "Ah! Ça Ira" ('les aristocrates a la lanterne', or, roughly, 'Lets go lynch the aristocrats'} sung by the first and bloodiest French Revolutionaries in the late 1780's. Elson (The National Music of America, 1899) reports: "It was sung to many a scene of massacre and bloodshed; it was warbled and trilled out when the mob carried the head of the beautiful Princess de Lamballe, on a pike, through the streets of Paris, and thrust it up for the unhappy queen to look at." Despite this gruesome association the melody began innocently enough as a light vaudeville piece composed by one M. Bécourt, a side-drum player at the Opéra. It soon proved popular as a contra-dance melody and frequently appeared in the French cotillions prior to its being seeped in blood. Interestingly, especially in view of the tune's later importation to America, the title was suggested by none other than Benjamin Franklin who used the phrase (which translates as "It will succeed") in connection with the prospects of the American Revolution. General Lafayette took Franklin's expression and passed it to a street singer named Ladré as a good refrain for a popular song. "Ça Ira" first appeared innocently enough as:

After the Paris mob burst forth in its fury, carried the Tuileries by assault and massacred the nobles in prison, these words appeared:

Vic Gammon, in his 1989 article "The Grand Conversation: Napoleon and British Popular Balladry," says the "La Ira" [sic] was adopted as a military march by the British Army, initially as a means of confusing the enemy on the battlefield [although this last thought has been challenged by several writers]. There is evidence that the tune and title "Downfall of Paris" was the product of the West Yorkshire Regiment, dating from the year 1793, however, a manuscript version of the tune titled the "The 7th Regiment Quick March or Surrender of Paris" [Cadbury Research Library: Special Collections, University of Birmingham – Finding number: SH 645] appears to predate that, and appears in the copybook of flute player Ensign Thomas Molyneaux of the 6th Regiment, who was stationed in Shelburne, Nova Scotia. 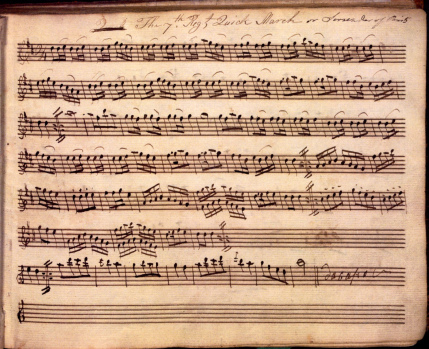 This would appear to bridge the gap between associations with the French Revolution, and the later Napoleonic conflicts.

It was played by British army bands during the Peninsular War against Napoleon's armies. Its dance roots gradually resurfaced, and in 1805 it was printed in O'Farrell's Pocket Companion for the Uilleann or Union Pipes, and in 1816 the melody was again printed, this time in England in London dancing master Thomas Wilson's Companion to the Ball Room. Freed somewhat from its military connotations, the dance tune "Downfall of Paris" became widespread in the British Isles, where it appears in collections of Irish music as well as in southern English village musicians' tune books. It was one of the official set dances (for dance competitions) in Ireland. Farther afield, a fairly elaborate version in the key of 'C' appears in the music manuscript book of James Findlay, dated 1841. Findlay was originally from Penpont, Dumfrieshire, Scotland, but emigrated with his brothers to Australia, where he settled on a farm in the Upper Murray at Towong Upper. His manuscript was found in an old sea chest at the family homestead by his grand-daughter, Ada Findlay. In addition "Downfall of Paris" (or "The Fall of Paris") can be found in a number of British musicians' manuscripts from the 19th century, including John Clare (Helpstone, Northants, 1820), Charles James Fox (Beverley, east Yorkshire, 1830), James Nuttal (Rossendale, east Lancashire, 1830), the Welch family manuscripts, John Moore (Shropshire), the Rev. Robert Harrison (Brampton, Cumbria, 1820), Wukkuan Tildesley (Swinton, Lancashire, c. 1860), William Clarke (Feltwell, Norfolk, 1858), the Staffs manuscript (anonymous, Staffordshire, 1820), John Hall (Northumberland, 1833), and others. Early published versions can be found in Cahusac's Compleat Tutor for the German Flute (London, 1798) and Wheatstone's Clarinet Preceptor (London, c. 1801).

"Downfall of Paris" was played as a Tattoo during the American Civil War, signalling bed-time and "lights out" in a military camp. Even today it is a standard in American fife-and-drum repertoire. The title appears in a list of traditional Ozark Mountain fiddle tunes compiled by musicologist/folklorist Vance Randolph, published by 1954. Some 'crooked' versions are extent in the United States (see Charlie Acuff's version which has 15 beats in the 'A' part). See note for "Mississippi Sawyer" for more on the American variant. Occasionally the "Downfall of Paris" title was retained in American old-time tradition.

Back to Downfall of Paris (The)