Downfall of the Gin

Back to Downfall of the Gin

DOWNFALL OF THE GIN. AKA - "Downfall of the Ginn." English, Old Hornpipe (3/2 time). E Minor. Standard tuning (fiddle). AABB. An excerpt from this hornpipe by the English composer Henry Purcell (1659-1695) appears in John Offord's article "Lancashire and Cheshire Hornpipes" (English Dance and Song, Summer 1990, 52{2}). The melody appears in Walsh's Third Book of the Most Celebrated Jiggs, Lancashire Hornpipes, Scotch and Highland Lilts, Northern Frisks, Morris and Cheshire Rounds (c. 1730), and Johnson's Choice Collection of 200 Favourite Country Dances, vol 3 (London, 1744, p. 10). Supposedly Purcell had the tune from John Walsh, who was also his publisher, and incorporated it into his "Abdelazer" rondeau (1695).

The title "Downfall of the Gin" is obscure. Gin is spelled both 'gin' and 'ginn' in old printings. 'Ginn' may be a variant spelling of the Arabic jinn, usually Anglicized as 'genie', referring to supernatural sprites or demons. This interpretation may fit with the moorish theme of "Adbelazer" although no link has be found. Alternatively, it may have to do the the distilled alcoholic spirit called gin. 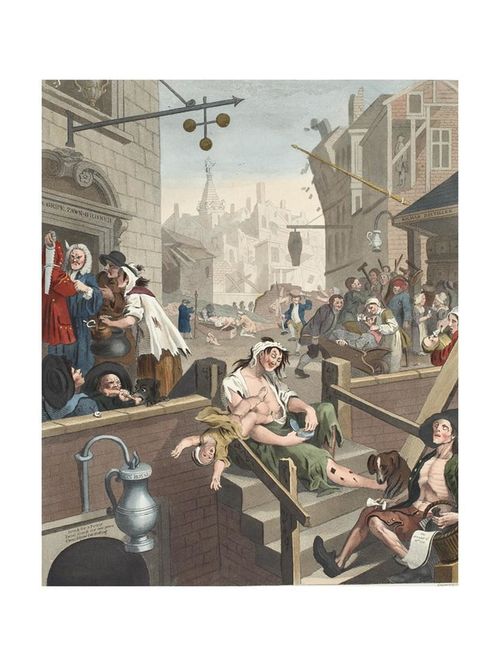 Gin was first imported to England from the Netherlands in the early 18th century, and quickly was established as the chosen intoxicant of the masses. Made from cheap corn and fermented juniper berries, gin was partly to blame for the increasing epidemic of crime in London, along with a lowered life-expectancy. Gin mills, places where gin was distilled and sold, frequently advertised "Drunk for a penny, dead drunk for two-pence, clean straw provided." Beer, wine and sherry, was considered a more healthful alternative (at least by Hogarth, who, in his print "Beer Street", drew the antithesis to his "Gin Lane" depicting healthy beer drinkers in a clean, safe neighborhood, save for the ramshackle shops of the undertaker and the pawn broker, driven to poverty by the prosperity of the sudsy populace).

Gin became an epidemic. "(It) was said to be the drink of the more sedentary trades," says David Hughson in his History of London (1806), "...essentially a disease of poverty, so cheap, so warming and brought such forgetfulness of cold and misery. At one time eight million gallons of gin passed the throats of English drinkers, with Londoners themselves consuming fourteen gallons each. As with all drug epidemics, crime, neglect and abuse flourished. Christopher Hibbert wrote in his book The Roots of Evil, "Pity was a strange and valuable emotion...Unwanted babies were left out in the streets to die or were thrown into dung heaps or open drains; the torture of animals was a popular sport. Cat-dropping, bear-baiting and bull-baiting were as universally enjoyed as throwing at cocks." Wikipedia gives: "When it became apparent that copious gin consumption was causing social problems, efforts were made to control the production of the spirit. The Gin Act 1736 imposed high taxes on sales of gin, forbade the sale of the spirit in quantities of less than two gallons and required an annual payment of £50 for a retail licence. This had little effect beyond increasing smuggling and driving the distilling trade underground. Various loopholes were exploited to avoid the taxes, including selling gin under pseudonyms such as Ladies' Delight, Bob, Cuckold's Delight, and the none-too-subtle Parliament gin. The prohibitive duty was gradually reduced and finally abolished in 1743. Francis Place later wrote that enjoyments for the poor of this time were limited: they had often had only two: "...sexual intercourse and drinking," and that "...drunkenness is by far the most desired..." as it was cheaper and its effects more enduring. By 1750 over a quarter of all residences in St Giles parish in London were gin shops, and most of these also operated as receivers of stolen goods and co-ordinating spots for prostitution"[1].

The gin craze finally began to subside after the Gin Act of 1751, which lowered license fees while encouraging "respectable" establishments for trade in the spirit. However, it is thought the a rise in the price of grain due to a series of poor harvests (resulting in gin being less affordable and available) did more to contribute to the diminishment of the epidemic. A similar peak in gin consumption took place more than one hundred years later, in the Victorian era, with the emergence of numerous "Gin Palaces."

Back to Downfall of the Gin