DROGHEDY MARCH. AKA and see "Mummer's March (The)." Irish, March (6/8 time). Standard tuning (fiddle). ABCDEFDH. Fleischmann gives a reference for this tune in J. Brysson's A Curious Selection Of Favourite Tunes With Variations to which is added upwards of fifty favourite Irish Airs for the German Flute or Violin, with a Bass for the Harpsichord or Violoncello. Harmoniz'd by an Eminent Master (Edinburgh, c. 1790). He notes that the title of the melody probably refers to Charles Moore, 2nd Viscount Drogheda who as involved in the siege of that same town in 1642. He was killed in clashes with Owen Roe O'Neill in 1643. The title may also be a corruption of the Irish word draiocht, meaning magic (see note for "Drocketty's March").

A "Droghedy's March" from county Wexford is described by Patrick Kennedy in 1812 in his book On the Banks of the Boro: 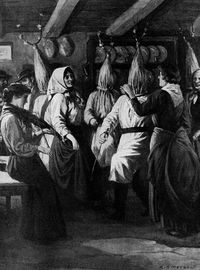 The tune called Droghedy's March was occasionally danced to among the hornpipes, by a performer furnished with a short cudgel in each hand, which he brandished and clashed in harmony with the tune. But we had the good fortune to see it performed in a complete fashion on the borders of the barony of Bargy, in the old manor-house of Coolcul, whose young men, joined by the stout servants and labourers on the farms, were well able, in country parlance, to clear a fair. Amongst these the present chronicler was initiated into the mysteries of mumming, and was taught to bear his part in that relic of the Pyrrhic or Druidic dance, "Droghedy's March." We practiced it in one of the great parlours, and this was the style of it's execution: six men or boys stood in line, at reasonable distance apart, and six others stood opposite them, all armed as described. When the music began, feet, and arms, and sticks commenced to keep time. Each dancer, swaying his body to the right and left, described an upright figure of 8 with the fists, both of them following the same direction, the ends of the sticks following the same figure, of course. In these movements no noise was made, but at certain bars the arms moved rapidly up and down, the upper and lower halves of the right-hand stick striking the lower half of the left-hand stick in the descent of the right arm, and the upper half of it in the ascent, and vice versa. At the proper point of the march each man commenced a kind of fencing with his vis-a-vis, and the clangs of the cudgels coincided with the beats of the music and the movements of the feet. Then commenced the involutions, evolutions, interlacings and unwindings, every one striking at the person with whom the movement brought him face to face, and the sounds of the sticks supplying the hoochings in the reels....The steps, which we have forgotten, could not have been difficult, for we mastered them.....This war dance is (or was) performed to a martial tune resembling Brian Boru's march... [Pp.231-32]

Nearly a century later Patrick Joseph McCall covered much the same material in his poem entitled "The Mummers of Bargy," and set it to the air of "Droghedy's March" and published in his Irish Noíníns (1894):

Down a the big manor-house of Kilquaun,
Assemble the girls and the boys all of Bargy--
Wondr'ous this night in the barn and the bawn
To hear Billeen Ceól with him pipes sweetly "arguy"!
Aiden Roche, the Mummer leader,
Came with a boy o' the Neils from Sleedhair;
Dick Shomes Phoor is George the Valiant,
Charley Hayes, St. Patrick the gallant--
Oh, such a crowd of the girls is collected,
'Twill be a surprise if there's no one neglected!
They line all the walls like a headland of lilies,
Or rosies, or posies, or daffy-down-dillies! 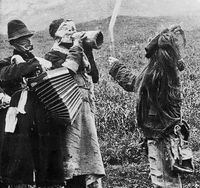 The centre is clear, and the candles alight,
When lo, fromt he haggard there comes a louch knocking;
Soon quickly troop in twelve Mummers in white,
With feathers flying, like wild geese a-flocking.
Round the go, two circles forming,
Billeen the "Soldier's Joy" performing.
Heels keep cracking, clubs a-crashing,
Arms a-swinging, eyes a-flashing.
In and out, round about, back to their places,
Fencing and foiling, the crowd interlaces;
Now all uncoil and in single file canter,
Yet striking and timing to Billeen's old changer.

The war dance of "Droghedy's March" fast they play;
Then the quick, single jig, "Nance Wants Her Answer,"
"The Geese in the Bog," and the grand "First o' May,"
"The Flowers," and a Reel, for the favourite dancer;
Then the Mummer's play commences,
When St. George so bold advances,
Tells of "draggins, elves, and jyants"
He has killed, and hurls defiance;
Till our St. Patrick, with green in his bonnet,
Appears on the scene, when his glove is thrown on it.
Oh! the saints fight, spite of their holy station,
And Patrick upholds the fair fame of his nation.

In comes a dochtor "so pure and good,"
To heal the deep wounds of the saintly contender,
Twenty gold guineas he wants to stop blood,
Saint Pat is charoosed with the quacky pretender.
Cromwell stalks, with nose of scarlet,
He calls Caesar great a varlet;
Dan O'Connell greets Napoleon--
E'en a poocha here has stolen.
Everyone, as he comes, "spachifies" neatly,
And shows off his skill and his prowess completely;
But they all make it up, just as it ought to be,
And, joining their hands in a ring, they dance "Droghedy."

But as this night is the last of such fun--
Twelfth Day is nigh, and the days getting light-some--
So the grand rinka of all is begun,
And for it the cailins dress beauteous and brightsome.
Aiden Roche takes Alley Kelly,
Dick Shones Phoor, Johanna Skelly,
Charley, Anty, Mogue, young Sheela,
Thus they mingle, three-na-cheela
Heel and toe, off they go, tripping and skipping,
Till daylight right over their shoulders is peeping.
The girls all make home at the top o' the morning,
But talk for a year of it, milking or churning!