DRURY HILL. English, Country Dance Tune (6/8 time). D Major. Standard tuning (fiddle). AABB. The title may refer to the narrow street in Nottingham, England, called Drury Hill [1] or Drewry Hill. An older name for it was Vault-lane after the huge rock cellars underneath a large house, called Vault Hall, to which it led. The Drury Hill name was given to the street around 1620, and honored a wealthy merchant, Alderman Drury, who then resided at Vault Hall. 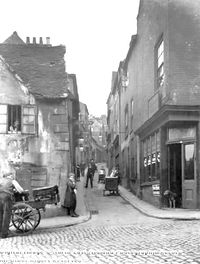 It was a wealthy neighborhood in the medieval times, but by the Victorian era the street and its surrounding area, known as Narrow Marsh, was notorious as one of the worst slums in Britain [2].