Find traditional instrumental music
This is the stable version, checked on 18 October 2021.
Jump to: navigation, search 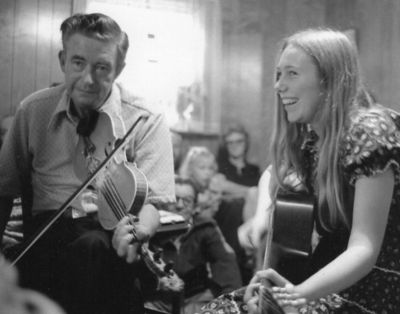 Albert Hash & Emily Spencer
DUGANNON. American, Reel. G Major. Standard tuning (fiddle). AA'BB'. The tune has been credited to Thornton Spencer (1935-2017) and, sometimes to Albert Hash (1917-1982). Hash was a founder-member of the Whitetop Mountain Band, and a master of the Grayson County, Va., stringband style. The original Whitetop band's heyday was in the 1940's, but resurgent interest in old-time stringband music among young people in the 1970's led to a new iteration of the Whitetop Mountain Band, formed around fiddler Hash, along with his brother-in-law Thornton Spencer and his wife, Emily (fiddler and guitar).

Dugannon is the name of a town in southwestern Virginia where Thornton and Emily Spencer lived for a time in the 1970's, when the Whitetop Band was reorganized.