Back to Duke of Marlborough's March

DUKE OF MARLBOROUGH'S MARCH. English, March or Country Dance Tune (cut time). C Major. Standard tuning (fiddle). AB. The tune first appears in John Young's Second Volume of the Dancing Master [1], first edition of 1710. It was retained in subsequent editions of 1714, 1718 and the final of 1728. It also appear in Walsh and Randall's New Country Dancing Master, Second Book (London, 1710), and in Walsh and Hare's Second Book of the Compleat Country Dancing-Master (1719).

The title refers to John Churchill [2] (1650-1722), 1st Duke of Marlborough, Prince of Mindelheim, one of Europe's greatest generals and the victor of Blenheim (1704). There are several tunes in Young's 1710 volume that refer to Churchill and his campaigns on the Continent. 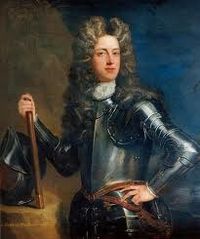 Back to Duke of Marlborough's March