Back to Duke of York’s Favourite[edit]

DUKE OF YORK'S FAVOURITE. Scottish, March (2/4 time). B Flat Major (Watlen): G Major (Aird). Standard tuning (fiddle). AABAA. John Watlen, in his Celebrated Circus Tunes (Edinburgh, 1791) attributes the tune to composer Ignaz Pleyel [1] (1757-1831), born in Austria, who became a French citizen around the beginning of the Republic, and who managed to negotiate those troubled times, even though accused at one time of being a Royalist agent. When the revolutionaries in France banned public concerts and music in church in 1791, Pleyel sought employment in London, where he stayed for a few years, leading concerts in that city (as did his old teacher, Joseph Haydn, with whom he remained cordial). 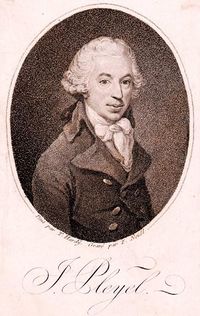 Back to Duke of York’s Favourite[edit]