Back to Dumbarton Castle (1)[edit]

DUMBARTON CASTLE [1]. Scottish, "Pastoral Air" or March (4/4 time). A Major. Standard tuning (fiddle). AAB. The air/march was printed in Scottish fiddler-composer J. Scott Skinner's [1] (1843–1927) Harp and Claymore collection (1904), credited to himself. A tune by this name earlier appeared in Joshua Campbell's 1778 collection. It was the Celtic population of Scotland that gave the name Dun Breattan (now Dumbarton), 'the fort of the Brittons', to the stronghold of that people on the Clyde for four centuries (Matthews, 1972) (Dumbarton from the Clyde). It was the capitol of Ceretic in the 5th century and the kings of Strathclyde until 1058. The fortress proved impregnable for three centuries until it was finally taken by the Pictish king Angus and Eadbert of Northumbria in 756; it was later stormed by the Vikings in 871 and taken after Artgal was betrayed. 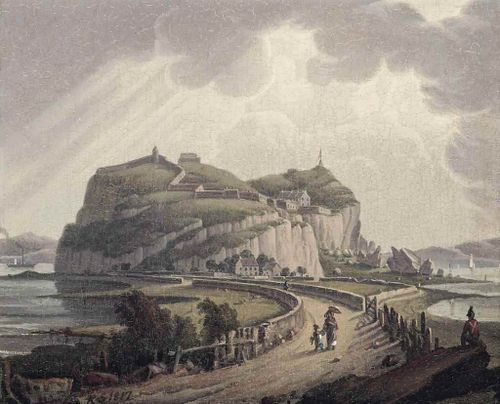 Back to Dumbarton Castle (1)[edit]