Find traditional instrumental music
This is the stable version, checked on 25 April 2021.
Jump to: navigation, search

Back to Dumfries House

DUMFRIES HOUSE. Scottish, Jig (6/8 time). G Major. Standard tuning (fiddle). AB (Callaghan, Kerr, Lowe): AAB (Anderson, Gow, Hunter): AABB' (Athole). The name Dumfries means 'stronghold by the little wood', from the Celtic root-word dun, meaning a fortified place. It was the place where, in 1306, Robert Bruce murdered John Comyn in the chapel of Grey Friars and subsequently claimed the throne of Scotland in rebellion against the English. Dumfries is closely associated with the poets Robert Burns and J.M. Barrie. The jig was composed by John Riddel (1718-95), the blind amateur fiddle-composer of Ayr, and first published (in Edinburgh by music publisher Robert Bremner) in his c. 1766 A Collection of Scots Reels, Minuets, etc. (p. 32). Other early printings were by James Aird in vol. 4 of his Selections of Scotch, English, Irish and Foreign Airs (1796) and Neil Stewart in Select Collection of Scots, English, Irish and Foreign Airs, Jiggs & Marches (Edinburgh, c. 1788). It is still popular and one of Riddell's best tunes, opines Francis Collinson (1966). It was picked up by English fiddlers and appears in the Elisabeth Williamson manuscript (dated 1790, although the place is unknown), George Malecot (Whitehaven, Cumbria, 1776-1779), and an anonymous 19th century West Midlands manuscript. It was included in the American music manuscript of William Patten (Philadelphia, Pa.) from around 1800, and County Cork cleric and uilleann piper James Goodman entered it into his mid-19th century music manuscript collection. Samuel Bayard thought the second part of this tune was a version of "Rosin the Beau." 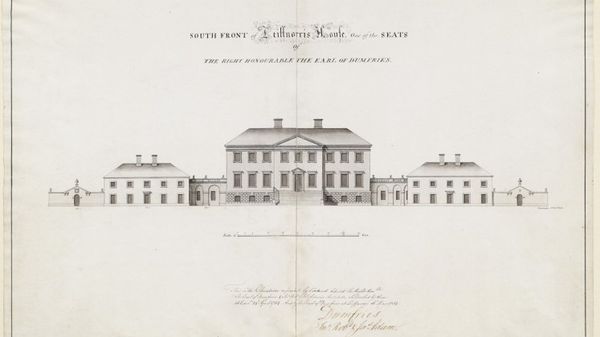 Dumfries House was a new house built by William Crichton-Dalrmple, 4th Earl of Dumfries, after he retired to his Ayrshire estate after resigning from the army. He solicited plans from the Adams brothers (John, Robert and James), architects, who submitted their design in 1754 and began construction. William's first wife, Lady Anne Gordon, died while the manor was being built, and their only son and child had died in childhood. Even as he continued work on Dumfries House (which was completed in 1759), the Earl sought another wife who might give him an heir and settled on his distant cousin, Anne Duff. She was beautiful, but perhaps not faithful, as, in 1762, a visitor noted "that Colonel Montgomery [was] expelled from Dumfries House for being behind the curtain with the new Countess" (the Colonel was perhaps Colonel Hugh Montgomery, 1749-1819, later the Earl of Eglinton). William died in 1770, still childless. Anne, having no children to anchor her to the estate, inherited relatively little and so remarried, and the estate went instead to the Earl's nephew, Patrick Macdouall (1726-1803), who was in active service in the army. He resigned his commission to move to Dumfries House and became the 5th Earl, and married Margaret Crawford (daughter of Ronald Crauford of Restalrig). They demolished the original house on the estate, Leifnorris House, in 1771. The 5th Earl and his wife did have issue, a daughter Elisabeth Penelope, born in 1771.

Elisabeth grew up to marry John, Lord Mount Stuart, eldest son of the Marquess of Bute, in a love match that united two powerful Scottish families. Unfortunately, their union was cut short when John fell from his horse two years later and died, but not before he sired a son. He left Elisabeth pregnant with her second child (a boy). She and the children remained at Dumfries House with their maternal grandparents and raised the children; the elder of the boys, John, succeeded as the 7th Earl of Dumfries in 1803 and also succeeded his paternal grandfather as 2nd Marquess of Bute in 1814.

Back to Dumfries House