DUNNICHEN HOUSE. AKA - "Dunnechan," "Dunnechan Reel." AKA and see "Miss Ranken’s Reel." Scottish, Reel (cut time). D Major. Standard tuning (fiddle). AB (Duff, Milne, Skye): AA'BB' (Glen). The melody can be found in Archibald Duff's 1794 collection, though a note in MacDonald's Skye Collection says it was taken from the Peter Milne's 1870 collection. Dunnichen, from the Scots Gaelic Dùn Neachdain, is a village in Angus, Scotland, near which is Dunnichen House, a country mansion purchased c. 1700 by a merchant named Dempster, from Dundee. Improvements were made by George Dempster (1735-1818), third Laird of Dunnichen, an agriculturalist and M.P., and it is his estate that appears to be honored by the composition. Dempster was known as 'Honest George', and by the end of his life had a reputation as an incorruptible, progressive, and independent-minded politician. 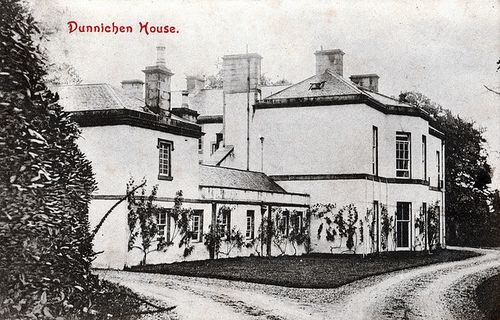 Dunnichen House. The structure was demolished in 1966.

The first strain of "Miss Wright's Fancy" is cognate, although the second strains differ.