Find traditional instrumental music
This is the stable version, checked on 2 December 2020.
Jump to: navigation, search

Back to Dunrobin Castle (1)

DUNROBIN CASTLE [1] (Caisteal Chunrobainn). AKA and see "Tibby Fowler o' the Glen (2) (The)." Scottish, Slow Strathspey. B Flat Major. Standard tuning (fiddle). AB. "This is the air of an unpublished rhapsodical address of Robert Donn Mackay, the Sutherland poet, to the castle of Dunrobin, on passing it,--alluding, in part, to the Countess marrying an English nobleman, not likely to listen to him, or patronize his genius" (Fraser). 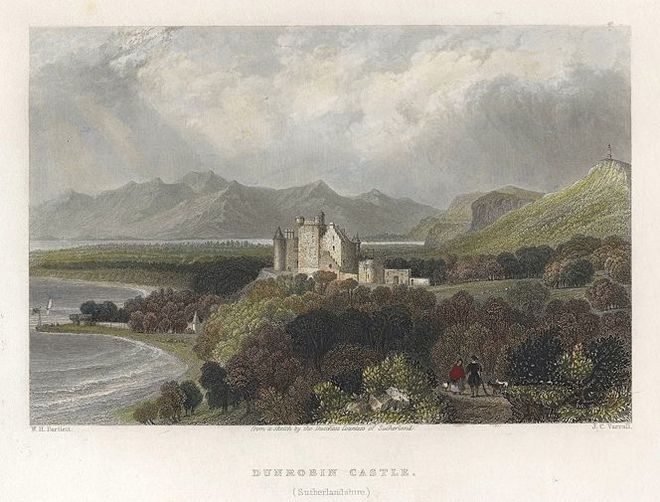 Dunrobin Castle lies one mile north of Golspie in north-east Scotland and is an imposing structure, redone at one time to look like a French chateau. After a disastrous fire in 1915, it was restored by Sir Robert Lorimer, who in 1921 designed as well the library, drawing rooms and dining rooms. It is still a functional edifice and boasts 189 rooms. Dunrobin Castle was for centuries the seat of the Earls and Dukes of Sutherland (the name is derived from the Norse "south lands", adopted by a Fleming who arrived there before the 13th century), located on the east coast of the northern Highlands overlooking the Moray Firth. The Sutherlands became infamous during the Highland Clearances for the forcible eviction of their crofters and tenants in order to clear the way for raising sheep, a more profitable use of the land at the time. Apparently they could be equally harsh with family members, for a ghost haunts the upper floors of Dunrobin reputed to be the daughter of the 14th Earl of Sutherland who was imprisoned by her father to stop her from marrying someone he had regarded as unsuitable. The unfortunate girl tried to escape by climbing down a rope from an upstairs room, but slipped and fell to her death.

Back to Dunrobin Castle (1)