Find traditional instrumental music
This is the stable version, checked on 7 April 2021.
Jump to: navigation, search

Back to Dutch Boarding House (The) 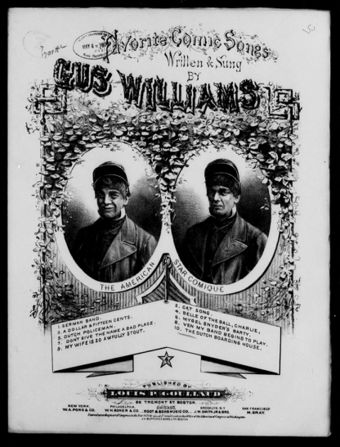 DUTCH BOARDING HOUSE, THE. American, Air (2/4 time). B Flat Major. Standard tuning (fiddle). AB. "Dutch Boarding House" is a song by Gus Williams (vaudeville) (1847-1915), composed in 1877. Williams was a German-American comedian and singer, born Gustav Wilhelm Leweck, and wrote a series of "Dutch" songs in the 1870's that caught the fancy of the American public, including "Dot Leedle German Band" (1872). The latter made reference to the typical "German" bands, usually made up of clarinet, tuba, cornet, alto horn, trombone, tuba and sometimes drums that could be heard on the streets of New York and other large cities.

The following is excerpted from James P. Leary's "Dialect Songs among the Dutch" [1]"

Sometimes billing himself as "The American Star Comique," Williams wrote and produced plays like "Captain Mishler" for the Broadway stage. He also tried his hand at sentimental and parlor songs, patriotic anthems like the "Banner Song," and such Negro Comic pieces as "Cleanin' Silber in De Kitchen." His Dutch dialect compositions began appearing as early as 1870 with the publication of "Vat's De Brice of Beans Jake?" and "Kully! Vere's Your Cat," and he is credited with introducing the first German dialect song, "Kaiser, Don't You Want to Buy a Dog," to the stage. While the covers of his non-Dutch sheet music are graced with photographs of a smiling, fashionably dressed, urbane, and clean-shaven fellow with a head of wavy hair, Williams' dialect publications present another image entirely. Clothed in a crudely-tailored frock coat, the Dutch Williams, grinning and glowering in side-by-side photos, sports chin whiskers but no moustache and a pudding- bowl haircut topped off with an ill-fitting brimless cap: the epitome of a rustic frump either just off the boat or hailing from the wilds of Pennsylvania. Clearly blessed with a dramatic flair, a good ear, a talent for mimicry, an awareness of a burgeoning immigrant community, and the wit to recognize a show business niche, Williams was a self-described "German Comedian" for more than four decades. By the 1880s, he garbled English and German in a celebrated skit entitled "The German Senator", and a vaudeville program from Chicago's Kedzie Avenue Theater—Devoted to High-Class Vaudeville and Motion Pictures”—reveals that as late as April 11, 1910, Williams was headlining vaudeville events under the billing "Dean of German Comedians."

Back to Dutch Boarding House (The)