Back to Dutch Hop

DUTCH HOP. Old-Time, Two-Step or Polka. USA, Arkansas. D Major ('A' part) & G Major ('B' part). Standard tuning (fiddle). AA'BB'. Source Lon Jordan, a dance and contest fiddler with a regional reputation, recorded the tune for researcher Vance Randolph in 1941. Drew Beisswenger (2008) points out that the Dutch Hop was a polka music form that was popular in the mid-20th century (e.g. in Colorado after World War II), although he could not connect this specific tune to the form. The term 'Dutch Hop' refers to the music and dance events of the Volga Deutsch, or Germans who lived in settlements in Russia around the Volga. Large numbers of the population emigrated to the United States in the late 19th and early 20th centuries, and reestablished themselves in the Great Plains states and provinces of the United States and Canada. Up until the World Wars of the 20th century, their dance gatherings were called German Dances, but due to the anti-German feeling of the times the name was changed to 'Dutch Hop' and the new name stuck. The Center for Volga German Studies [1] describes the typical instrumentation at dances: 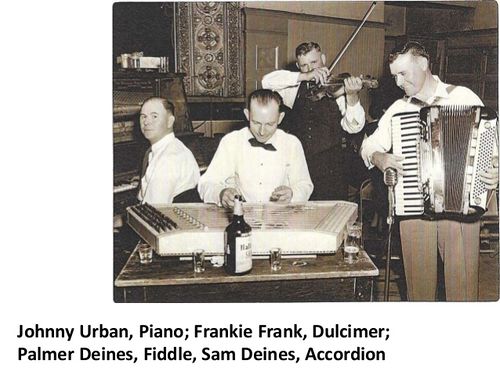 In Dutch Hop, the hammered dulcimer is played in a unique manner and it is also the only one of the original instruments left in the typical modern-day Dutch Hop ensemble.

Earlier groups in Russia and the U.S. usually consisted of a dulcimer, a string bass, two violins, and a clarinet. The versatile accordion became one of the lead instruments prior to the 1940s, supplanting the clarinet and violins. Gradually, the string bass has given way to a combination of trombone and electric bass. Dutch Hop bands typically include four musicians who play an accordion, a bass electric piano or guitar, a trombone, and the characteristic hammered dulcimer. Dutch Hop dancers respond to the band's beat by adding a bounce to their steps and frequently an extra little hop or a stomp to the smoother regular polka dance.

Back to Dutch Hop