Find traditional instrumental music
This is the stable version, checked on 14 April 2020.
Jump to: navigation, search

Back to Earl of Balcarras March

EARL OF BALCARRAS MARCH. Scottish, March. F Major (Watlen): G Major (Aird). Standard tuning (fiddle). AABB. The march first appears in John Watlen's Celebrated Circus Tunes (Edinburgh, 1791) where it is attributed to the Earl's wife, Countess Balcarras. Watlen also published it in his Collection of Celebrated Marches & Quick Steps (Edinburgh, 1798, p. 2). The march was reprinted--as, indeeed, were all the tunes in Watlen's 1791 collection--in Glasgow publisher James Aird's Selection of Scotch, English, Irish and Foreign Airs, vol. 4 (1796, p. 49). Elizabeth Dalrymple Lindsay (1759-1816) was the Countess of Balcarres in Fife, a patroness of musicians in the Scottish capital of Edinburgh, and an accomplished keyboard player. Two of her compositions, "Lady Eliza Lindsay" and "Lady Eliza Lindsay's Minuet", hornpipe and minuet, were named for her ten-year-old daughter, and appear in John Watlen's 1791 collection of Celebrated Circus Tunes, as does her "Vulcan's March (see Vulcan's March). Haigh Hall is presently the seat of the Earl of Balcarres, having been inherited out of the Bradshaw/Bradshaigh family in 1780 when Alexander, the sixth Earl of Balcarres, married Elizabeth (his 1st cousin), only child of Charles Dalrymple, Esq., who himself had inherited the Haigh property from his wife. See also "Lady Balcarras." 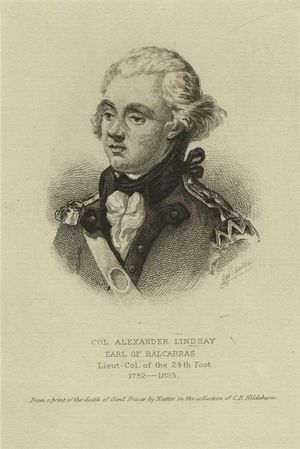 Alexander Lindsay (1752-1825), the 6th Earl of Balcarres, served in the British army during the American Revolution. In 1777 he commended the 53rd Regiment of the Light Infantry, under the command of General Burgoyne, and was with him at the battle of Saratoga, New York. Along with the rest of Burgoyne's army, he surrendered to the American forces October 17 of that year. One of the American commanders opposing him was General Benedict Arnold, prior to his betrayal of West Point to the British. In fact, Arnold was brave and heroic during this battle, and did much to secure the victory. Lindsay spent two years in captivity before being exchanged. Some time later, in England, the Earl and Arnold were introduced by King George III, and Lindsay, somewhat taken by surprise, drew back and exclaimed, "What, sire! The traitor Arnold!" Arnold could not let the public slight go and issued a challenge. A duel resulted in which the antagonists were to fire at a given signal. Arnold fired and missed, leaving his fate in the Earl's hands. However, Lindsay simply turned and walked away. "Why don't you fire, my lord?" asked Arnold. "Sir," said Lord Balcarras, glancing back, "I leave you to the executioners."

Lord Balcarres continued to rise in rank and prestige, and was appointed governor of Jersey, and then of Jamaica. On his return from Jamaica in 1801 he lived chiefly at the family's second residence at Haigh, which had been in a state of decay, but which he perfectly restored, as well as the fortunes of his family. Lindsay's sister was Lady Anne Barnard, famous as the writer of the ballad "Auld Robin Gray (1)."

Back to Earl of Balcarras March