Find traditional instrumental music
This is the stable version, checked on 30 March 2020.
Jump to: navigation, search

Back to Edinburgh Castle (1)

EDINBURGH CASTLE [1]. AKA - "Edinborough Castle." AKA and see "As 'Tis Danc'd at the Playhouse," "Country Dance at the Jubilee (A)," "Trip to the Jubilee." English, Country Dance Tune (9/4 time). D Major. Standard tuning (fiddle). AB (Walsh): AABB (Playford). The melody and dance directions were first printed by Henry Playford in his Dancing Master Part II, 2nd edition (effectively a version of the ninth edition of the Dancing Master). It was retained in subsequent editions of the Dancing Master through the 16th edition of 1716. For the 17th and 18th editions a different melody with the name "Edinburgh Town" was printed (see "Edinburgh Town (3)." "Edinburgh Castle (1)" also was printed in the various editions of John Walsh's The Compleat Country Dancing Master (1718, 1731, 1754). 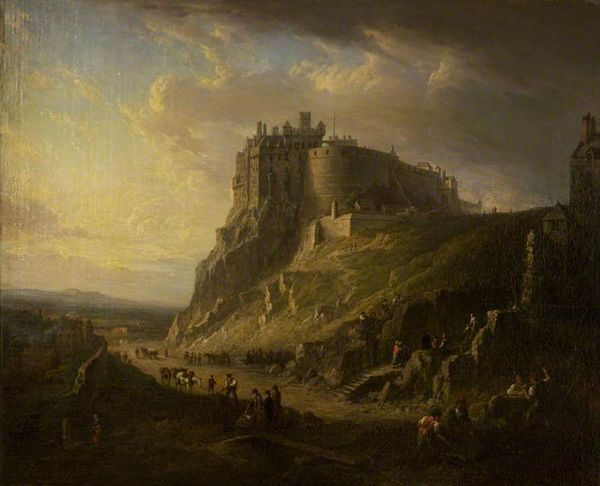 View of Edinburgh Castle by Alexander Nasmyth (photo credit: The National Trust for Scotland)
The melody was entered into the 1694 music manuscript collection of Northumbrian musician Henry Atkinson (Morpeth) under the title "Country Dance at the Jubilee."

Back to Edinburgh Castle (1)