Find traditional instrumental music
This is the stable version, checked on 17 August 2019.
Jump to: navigation, search

Back to Eglinton Castle

EGLINTON CASTLE. Scottish, Strathspey (whole time). B Flat Major. Standard tuning (fiddle). AAB. Gow's Fourth Collection (Edinburgh, 1800) was dedicated to the 12th Earl of Eglinton, to whom the melody is attributed. The earl was Hugh Montgomerie (1739-1819), the 12th Earl of Eglinton, a Scottish peer, politician, musician (cello) and composer. After some service in the army in the American wars, he became a member of Parliament for Ayrshire, serving for 16 years, after which, in 1796, he became Lord-Lieutenant for Ayrshire. Mongomerie was one of the backers of the partially built Glasgow, Paisley and Ardrossan Canal, which facilitated shipping to the Scottish interior. See "Ayrshire Lasses (2)" for another of his compositions. 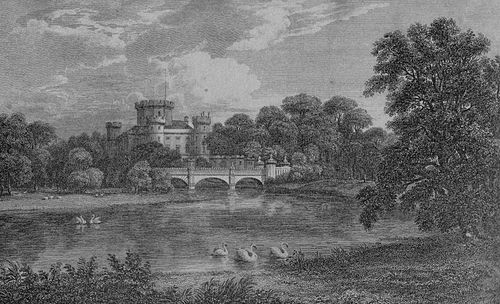 Eglinton Castle [1][2] is a large mansion in Kilwinning, North Ayrshire, built between 1797 and 1802 on the site of a 16th-century stronghold of the Montgomerie family. A lavish medieval themed tournament and entertainment was held on the grounds in the first half of the 19th century by the 13th Earl of Eglinton, long after the Gows paid tribute to the then-new mansion. It deteriorated over the years and the structure was abandoned early in the 20th century and is largely demolished today.

Archibald Montgomerie (mounted, centre in gold), the 13th Earl of Eglinton acknowledges the crowd at the mock medieval Tournament of Eglinton held in late August, 1839.

Back to Eglinton Castle