Back to Ettrick Banks

ETTRICK BANKS. AKA - "Etrick Banks," "On Ettrick Banks." Scottish, Air (4/4 time). B Minor (Graham): E Minor (O'Farrell): F Major (McGibbon). Standard tuning (fiddle). AAB (O'Farrell): AABB (McGibbon). The Ettrick is a river in Selkirkshire, and flows northeast for thirty miles (during which it receives the Yarrow) before it empties into the Tweed near Melrose. Tait's Edinburgh Magazine printed an article on "Scottish Rivers--The Tweed" (vol. 14, 1887, p. 506), which mentions the Ettrick, and remarked: 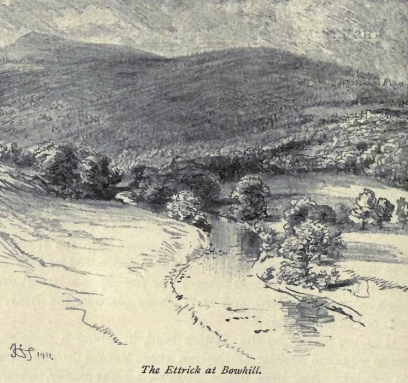 The Ettrick at Bowhill, by Hugh Thompson (Lang & Lang, "Highways and Byways of the Border", 1913).

The Ettrick rises, as we are told, from among a few rushes, between Loch-fell and Capel-fell, on the south side of a range of hills, which may be called "the back-bone of the country," at a point two miles above Potburn, which is said to be the highest situated farm-house above the sea in the south of Scotland. Mr. Staddart tells us that "Ettrick abounds in nice trout, weighing, on the average, a quarter of a pound, but I have killed them occasionally, below Thirlestane, upwards of a pound, and recollect seeing one taken there nearly three times that weight. From the burns which empty themselves in the upper districts, I have known my friend John Wilson, Jun., of Elbray, to capture, with the worm, twelve dozen in the course of an forenoon. Sea-trout, both the whitling and the bull species, ascend the Ettrick in November, sometimes in great numbers--as many as three score have been slaughtered, by means of the leister, in one night, out of a single pool. The true salmon killed on an occasion of this sort are compartively few.

"(On) Ettrick Banks" is an song and air by an unknown composer. The lyric in Allan Ramsay's Tea Table Miscellany of 1724, although he did not claim it, and the melody was inserted into the Orpheus Caledonius (1725), along with the same stanzas that later appeared in Johnson's Scots Musical Museum. Ramsay's lyric begins:

On Ettrick banks, in a summer night,
At glowming when the sheep drave hame,
I met my lassie braw and tight,
While wading, barefoot, a' her lane:
My heart grew light, I ran, I flang
My arms about her lily-neck,
And kiss'd and clapp'd her there fou lang;
My words they were na mony, feck.

Robert Burns reworked the old song for his own "On Ettrick Banks," which he sent to Mrs. Stewart of Stair.

On Ettrick banks on a summer's night,
At gloaming when the sheep drove hame,
I met my lassie bra' and tight
Cam' wading barefoot, a' her lane.
My heart grew light, I ran, I flang
My arms about her lily neck,
And kiss'd and clap'd her there fu' lang
My words there were na' mony feck.

Burns also used the melody for his song "The Bonny Lass o' Ballochmyle," written as he walked the banks of the River Ayr for Wilhelmina Alexander. Franz Joseph Haydn composed an arrangement of the song (H 31a/151). The tune is in Oswald's Curious Collection Scots Tunes (1740, 28), McGibbon's Scots Tunes (1742, 23), Oswald's Caledonian Pocket Companion (1751, I'll. 16), Johnson's Scots Musical Museum (1787, No. 81), and every important collection of vocal music of the latter half of the eighteenth century. James Oswald used the tune as the second section of his sonata which appears in Curious Collection of Scots Tunes (c. 1739), although it had been first published in Orpheus Caledonuis in 1725 as the tune of a song by poet and playwright Allan Ramsay (poet) (1686-1758). It also appears in the 1768 (James) Gillespie Manuscript of Perth. Robin Williamson thinks it was "undoubtedly old in its day." Robert Burns wrote his love song "The Bonnie Lass of Ballochmyle" to the tune, an ode to Wilhelmina Alexander (1750-1843), the fourth daughter of the laird of the estate of Ballochmyle of Ayr, whom he spied walking one day in 1786. He sent a copy of the song to her along with a pandering letter, and asked her permission to use it in a second edition of his poems, but the lass declined to even answer him. Rebuffed, Burns sniffed that Wilhelmina was 'too fine a lass to notice so plain a compliment', but the truth is that Wilhelmina never married, and it is said the love poem became her most prized possession later in life. It is included, along with other Scots songs and dance melodies, in the music manuscripts of Setauket, Long Island, painter and fiddler William Sidney Mount [1] (1807-1868). Mount played a good amount of music for dancing and his own pleasure, and had access to both printed and local sources.

Back to Ettrick Banks