EUGENE STRATTON. Scottish, Hornpipe. B-Flat Major. Standard tuning (fiddle). AABB. Composed by the famous Scots composer and fiddler J. Scott Skinner (1843–1927), recorded by him on a 78 RPM disc in the 1920's, at the end of his career, as part of "The Celebrated Hornpipes" medley. Skinner had also earlier recorded "Eugene Stratton" in 1910 in London with pianist Ethel Stuart, one of a series of Skinner recordings from that session heard by a young Donegal fiddler John Doherty, and added to his own repertory [1]. A copy of the melody was written on the back of a postcard [1] and sent by Skinner to Alexander Grant (1856–1942), a younger fiddler of considerable skill, at Inverness in 1905. 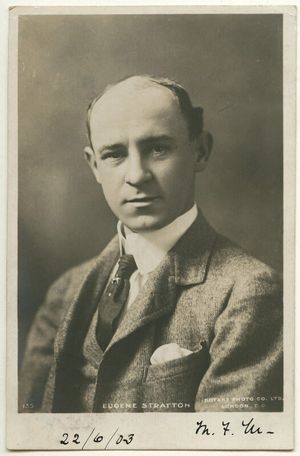 New York-born Eugene Stratton (1861–1918) came to England with a minstrel troupe and established himself as a solo music hall performer, whose act included blackface routines at which times he was styled as "The Dandy Coon," or "The Whistling Coon." His most famous song was "Lily of Laguna." He was the President of the Grand Order of the Water Rats in 1896. This charitable group began in 1887 with several music hall performers who owned a trotting pony called Magpie that was winning many races around London. The proceeds from such victories were used to help troubled and distressed music hall stars and to help sustain soup kitchens in London's east end. The name of the group came about when, during a torrential downpour, the pony was being returned to stabling. A horsedrawn taxi driver, seeing the sodden beast shouted: "Blimey, wot you got 'ere?" The trainers replied they had a trotting pony. "Trotting pony!," barked the cabbie, "looks more like a bleedin' water rat." 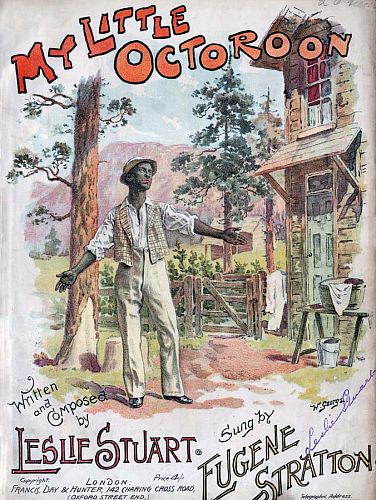 EUGENE STRATTON (Ruhlman), who is at the present time one of the most pronounced favourites in England of any man that ever blacked his face, began his stage career about 1878 as one of the Four Arnold Brothers. On the 21st day of October, that year, he opened at Chicago with Haverly's Original Mastodon Minstrels. He was a member of that company when they opened at the Drury Lane Theatre, London, England, July 31, 1880. Shortly after this event he went to Moore and Burgess' Minstrels in the same city, where he remained about ten years. In addition to being a good song and dance man, he also developed into a fine comedian. Eugene Stratton was born in Buffalo, N.Y., about 1864. (p. 320).