The Exeter Exchange [1], or Exeter Change as it was called, was a building in the north side of the Strand in London. From 1773 it was the home to a menagerie housed on the upper floors, in competition with the Royal Menagerie at the Tower of London. Mr. Pidcock was the manager.

The numerous parties of distinction that daily visit the Royal Menagerie, Exeter ‘Change, is a well-merited reward to its celebrated Proprietor, for his spirited and indefatigable exertions, in procuring, for the inspection of the public, those remarkable and rare living objects of the first celebrity in natural history, which no other capital in Europe can boast of.

The formidable Rhinoceros, which is grown so prodigiously since his arrival in 1810, as to be considered one of the largest ever seen, even in India, is so extremely rare, that many gentlemen have taken long and extensive excursions in its native country, without ever having an opportunity to see that animal; and his history, in many respects, is but very imperfectly known. Where it inhabits it is a dread to the human race, as well as to all beasts of the forest, being in strength inferior to none, and so protected, by nature, with his coat of mail, as to be capable of resisting the attacks of any other animal, and even the force of a musket-ball: but, what is more wonderful, in the adjoining den, in the same apartment, there is a fine large Male Elephant (indisputably one of the finest specimens of its species ever brought from India, and adorned with long ivory tusks); those, the two most formidable enemies in nature, are so closely united, and so reconciled, as to suffer to take their food from each other. 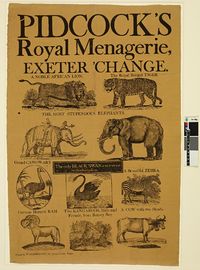 The other apartments contain the Tapir, or Hippopotamus of the New World, that elegant quadruped, the Quagga, or Wild Horse of Ethiopia, the beautiful Nilghaw, from the interior of India, and the grand assemblage of Lions, Royal Tiger, Panther, Leopards, Ounce, Cervat, Hyaena, Ursine Sloth, Arabian Camel, Antelopes, Southern Ostrich, Grand Cassowary, the Royal Crown Bird, Vultures, and hundreds of other rare and interesting quadrupeds, and birds of the most exquisite plumage, all in fine health and condition, and so perfectly clean and secured, that the most timorous and delicate may approach them without fear or being annoyed. So desirable an exhibition is justly considered a great acquisition to the metropolis, and cannot fail of giving universal satisfaction. [quoted in Rachel Knowles' Regency History blog [2] ].

After the death of the star attraction, the elephant Chunee (who, maddened by an infected tusk due to poor care, had run amok, killing one of his keepers), the attraction waned in popularity and was closed at that location. The building was demolished in 1829.