Back to Fagan and Fenton's 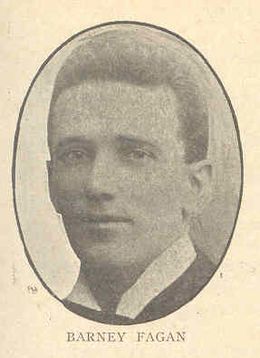 (Barney Fagan) is justly recognized as the world's greatest dancer; as a producer, he ranks second to none. Mr. Fagan made his first professional appearance in his native city at the famous Howard Athenaeum in 1860, as the Cabin Boy in the "Pilot of Brest." He remained at this theatre several seasons. In 1865 he played his first minstrel engagement with the Morris Brothers in Boston. In 1870 Mr. Fagan went to St. Johns, N.B., and appeared with Pete Lee's Minstrels. In 1873 he joined Buckley's Serenaders in Boston, and took Joe Parks as a partner; the next three years, Fagan and Parks, known as the American Lads, played variety engagements. In 1876 he did the famous Heifer dance with Richard Golden in "Evangeline." Mr. Fagan next joined John Fenton in a dancing specialty, and continued with him until 1878, when he formed a partnership with Lizzie Mulvey, which lasted one season. Mr. Fagan in 1879 allied himself with Barlow, Wilson, Primrose and West's Minstrels, and continued with them until the company's dissolution in June, 1882; with this organization he was general producer and soloist. Probably Mr. Fagan's greatest achievement was in organizing and producing Seatnam, Billy Rice and Fagan's Minstrels, which gave their first performance at Albany, N.Y., July 25, 1887; this was the largest minstrel company that had ever travelled; 105 persons on parade; 88 in the regular company; incidentally that show was just twenty-three years ahead of its time; in other words, Sweatnam, Rice and Fagan's minstrels are about due again. Subsequently Mr. Fagan was with Thatcher, Primrose and West; Barlow, Wilson and Rankin's; and Cleveland's Minstrels; with the latter organization sitting on the opposite end to Luke Schoolcraft. Outside of minstrelsy Mr. Fagan has appeared successfully in white-face in such plays as "Paradise Alley," and his own company, "A High Roller," the latter in 1890. Some notable marches were the "West Point Cadets; the "Phantom Guards" and "The Dance of the Popinjays"; the latter being one of the cleverest conceits ever seen in minstrelsy. Mr. Fagan was general producer for Corinne for several seasons, also with other notable companies.

As a song writer he is no less prominent; "Everybody Takes Their Hat Off to Me," and "A High Born Lady," each enjoyed great popularity. Likewise did ths versatile genius write some very clever plays, notably –"The Land of Fancy," "The Game of Love" and several others. Mr. Fagan has been playing with Herietta Byron, of the Byron Sistes, since 1895. Barney Fagan was born in Boston, Massachusetts, Janurary 12, 1850.

Barney Fagan (1850-1937) is credited with being a progenitor of both music and dance genres. His compositions were important in the development of ragtime, in the opinion of Sigmund Spaeth (A History of Popular Music in America, 1948). "...Fagan's lively 'coon song', 'My Gal Is a High Born Lady', [1886, was] definitely above the average in both words and music. Fagan was an Irishman, but familiar with minstrel technique and one of the great buck-and-wing dancers of his day. He was famous also as a stage director, creating many elaborate acts for Primrose and West, with a feeling for color and lighting far in advance of his time. There is a story (probably started by Fagan himself) that he wrote his great hit in Chicago one morning, when he found himself down to his last twenty-five cents, and on his wife's birthday at that. He took a bicycle ride along the Lake, brode a pedal and suddenly became conscious of a persistent rhythm as the dangling piece clicked against the wheel. The words 'My gal is a high born lady' fitted into the rhythm and suggested a rag-time melody. He stopped long enough to write down the main theme, then hurried home to complete the song, taking it immediately to a publisher and collecting $100.00 in cash, which he promptly spent on a birthday dress and a big party...(More important is the fact that the piano arrangement of 'My Gal Is a High Born Lady' was made by a youngster named Gustav Luders, of later operatic fame.)" (pp. 287-288). Dancers sometimes credit him with being the "Father of Tap"(Dancing), although that title has also been applied to others. Frank Dumont in an article in the New York Clipper (March 27, 1915 – "The Younger Generation in Minstrelsy and Reminiscences of the Past") remembers Fagan as "the greatest dancer and producer of dancing tableaux and novel groupings...He was a genuine 'find' to minstrelsy and his methods are copied to this day in all dancing numbers. He was especially attentive to the young element and made great dancers of them."

Back to Fagan and Fenton's