FALLS OF CORRYMULZIE, THE. Scottish, Reel. A Major. Standard tuning (fiddle). AAB. From a guidebook, The Deeside Guide (1889): 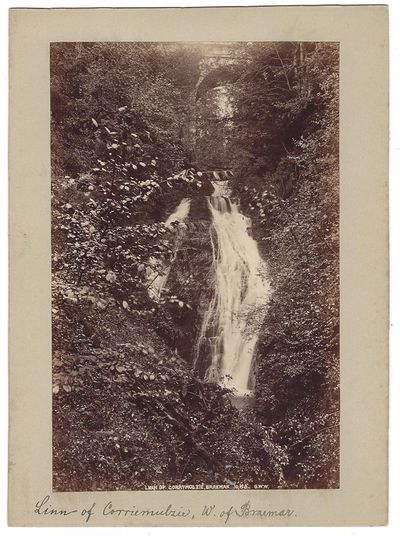 About a mile and a half from the Carr we come to the Falls of Corrymulzie, which, for picturesque beauty, have no equal on the Deeside. There is a bridge on the road, crossing the ravine through which the water rushes. Down the edge of this ravine a zig-zag staircase is cut out, from which, as we descend, the cascade can be seen in many varied aspects. At the bottom of the glen is a small rustic hut, from which a full front view of the falls is obtained--the height of the precipice being about sixty feet. The ravine is most luxuriantly wooded, and clad with all varieties of wild flowers, so that on a sultry day it will be found a cool and pleasant retreat. Near by, on the south side of the road, is Corrymulzie Cottage, the summer residence of the Earl of Fife. The site is 1250 feet above sea level, and the wild beauty of the surroundings makes it particularly attractive.

The reel was composed by Aberdeenshire fiddler-composer Alexander Walker, born in Rhynie, Strathbogie, in 1819. Walker was an inventor (of surveying instruments, for example), agriculturalist, fiddler and composer of works collected in a volume published in Aberdeen in 1866. He was employed as a gardener for Sir Charles Forbes at Castle Newe, who was also his patron. While in Scotland he took a wife, Jean (11 years his junior), and at age 40 became father of a daughter, Maggie, followed by three sons (Charles, Alexander and George—Charles perhaps named after Sir Charles Forbes). Walker knew a young J. Scott Skinner, who was employed as a dancing master for the tenantry of the Queen’s residence at Balmoral, and co-wrote a tune with him. Walker himself played in bands for entertainments given by the Royal Family [Allan Thomas, A New Most Excellent Dancing Master, 1992 ].