FATHER HENEBRY'S HORNPIPE. Irish, Hornpipe (2/4 time). G Major. Standard tuning (fiddle). AB. Father Richard Henebry [1], who was born in Portlaw, County Waterford, in 1863, was a controversialist in Irish language and musical matters, and was a fiddle-player. He was professor of Irish in the Catholic University of Washington, and in University College, Cork, where he died in 1916. He published a pamphlet on Irish music in 1903, and was a friend of Captain Francis O'Neill during his stay in America, and continued to correspond with him on his return to Ireland. His manuscript Handbook of Irish Music was published posthumously in 1928 and proved to be a dense text that attempted to establish the tonality of Irish music, and contended that its intervals differed from those of European music. Supporting this contention was an analysis by German acousticians who analyzed numerous cylinder recordings Henebry supplied collected in the Ring Gaeltacht in July, 1905. [Ceol Tire 24, November, 1983]. 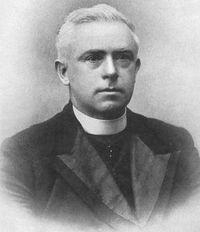 Source for notated version: "Mr. Curran of Ring, who himself got [it] from Fr. Henebry” [Hardebeck].