FERMOY LASSES, THE (Na Cailinide Ua Feara-Muige). AKA and see "Connacht Ranger (The)," "Connacht Rangers (2) (The)," "Humors of Mackin," "Off to Dublin," "Wexford Reel (2)." Irish, Reel. E Minor ('A' part) & G Major ('B' part). Standard tuning (fiddle). AB (Mitchell, Shields/Goodman): AA'B (O'Neill): AABB (Flaherty, Mallinson, O'Malley, Perlman): AA'BB (Moylan). Fermoy is in County Cork. The earliest appearance of the tune in print or manuscript form appears to be in Church of Ireland cleric James Goodman's mid-19th century manuscripts, where it is given as an untitled reel. Goodman (1828-1896) was an uilleann piper and an Irish speaker who collected locally in County Cork and elsewhere in Munster, although he also obtained tunes from manuscripts and printed sources. The reel was remembered by Kilmaley, County Clare, fiddler, flute player and uilleann piper Peader O'Loughlin as one of the tunes he listened to his father, a flute player, play in the 1930's. "'Twas a very simple, beautiful version of it, you know. Some of the tunes that are played today, you'd hear the difference, they're not the same. And d'you know, the more that you hear you might say they're not improved either" (Blooming Meadows, 1998, p. 170). Luke O'Malley says: "For years in New York this was called the 'Leitrim Thrush (2) (The)'." "Piper's Glass (The)" shares a second strain with "Fermoy Lasses." The reel has some currency among Cape Breton fiddlers, where it has been recorded a number of times by various artists. 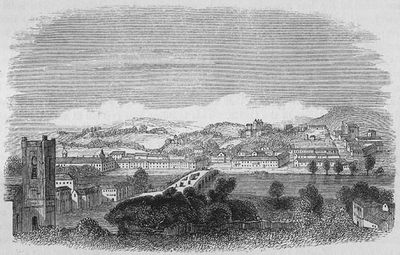 The first sound recording of "Fermoy Lasses" is by piper Patrick J. "Patsy Touhey" (1865-1923), who made a privately issued recording of the tune prior to 1919. Touhey was born in Loughrea, Co. Galway, but emigrated as a toddler with his family to Boston. His father was a piper, but died before he could pass on his mastery of the instrument, and although the young Touhey took some lessons from a pupil of his father's, he abandoned the instrument for a while. It was not until later in his teenage years that Touhey again took up the instrument. He was living in Brooklyn at the time and made the acquaintance of a piper from the Bowery, named John Egan. Egan inspired him to take up the pipes again and tutored him until Touhey had himself become a master. Touhey made his home in later years on the Grand Concourse in the Bronx. Upon his death, in 1923, he was buried in St. Raymond's cemetery (where Michael Coleman and James Morrison are also buried). Another early recording (1924) was by McConnell's Four Leaf Shamrock Orchestra, under the title "Off to Dublin."